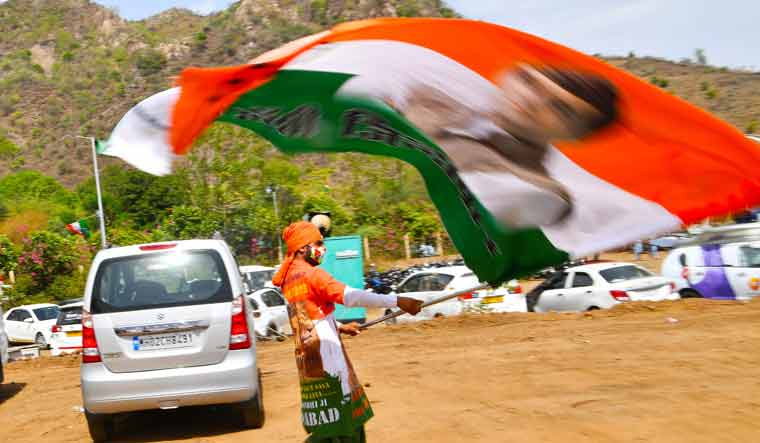 Criticised for its failure to hit the streets on a consistent basis and provide an effective opposition to the Modi government, the Congress has discussed a roadmap for a sustained agitation on people’s issues over the next two years.

Party leaders have, at the party’s Nav Sankalp Shivir, discussed the contours of what is being called a 'Jan Jagran Abhiyan', and which will be undertaken over the next two years in the run up to the Lok Sabha elections in 2024.

Congress President Sonia Gandhi and former party chief Rahul Gandhi brainstormed with AICC general secretaries and secretaries, state Congress chiefs and Congress Legislature Party leaders amongst others on what should be the format of the agitation programme.

According to party sources, it has been discussed that while agitations will be undertaken at the national level, the state units can plan protests of their own based on the issues that resonate in those states. The idea behind the agitation plan is that the party should not hit the streets only in the run up to elections, but should carry out agitations on issues that are top of the mind for the people on a sustained basis. The party plans to agitate against price rise, unemployment, farm distress, situation at the border with China and compromising the autonomy of constitutional bodies.

The nine-member panel had been formed on September 2, 2021, to plan a sustained agitation on national issues. Based on the recommendations of the group, the party had launched from November 14 to 29, 2021 a nationwide mass agitation programme Jan Jagran Abhiyan on the Modi government’s "failed economic policies". The plan involved holding a week-long padayatra with night halt in villages, prabhat pheris, shramdaan.

The committee discussing political issues, which is headed by Leader of Opposition in the Rajya Sabha Mallikarjun Kharge, has discussed that a connect must be established through village to village, door to door and people to people contacts. This can be done by holding a series of padyatras led by prominent and senior party leaders across the country, starting right now, it has been proposed. Also, seminars, workshops and interactive sessions can be held, it was proposed.