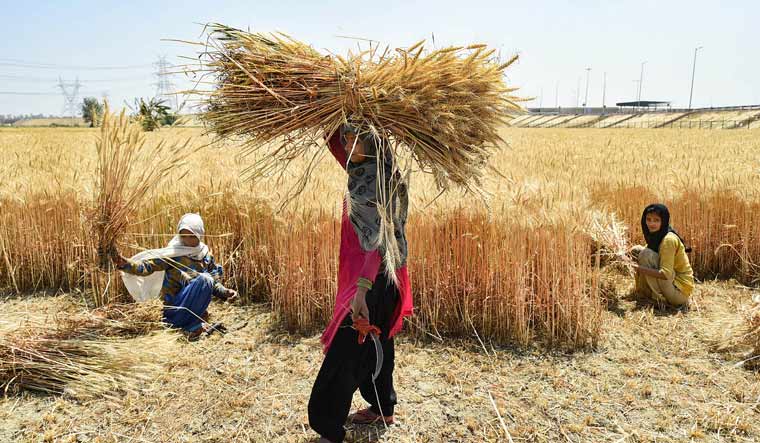 Keeping in mind food security needs of the country, the Centre on Saturday banned wheat exports. This decision comes as food prices, including that of wheat have escalated in the retail market, coupled with low procurement in the current season.

The Directorate General of Foreign Trade, in its order, stated the move has been necessitated by sudden change in the global market of wheat as the prices escalated. “The government of India is committed to providing for the food security requirements of India, neighbouring and other vulnerable developing countries which are adversely affected by the sudden changes in the global market for wheat and are unable to access adequate wheat supplies,” DGFT order dated May 13 stated.

The export will continue where irrevocable letters of credit has been issued, on or before the May 13 notification, the order said.

After the ban, the prices of wheat products are expected to come down in the country. In the retail market, wheat flour (atta) is sold at average price of Rs 33.14 per kg—over 12 per cent increase since last year. The price was highest in Mumbai at Rs 53 per kilograms. The inflation had surged to 7.79 per cent in April which put further pressure on the government to control prices.

Earlier this week, the Ministry of Commerce and Industry had reported that it will send trade delegations to Morocco, Tunisia, Indonesia, Philippines, Thailand, Vietnam, Turkey, Algeria and Lebanon for exploring possibilities of boosting wheat exports from India.

“India has set a target of a record 10 million tonnes of wheat export in the 2022-23 amid rising global demand for the grain globally. The Ministry of Commerce and Industry has already set up a task force on wheat exports with representatives from various ministries, including commerce, shipping and railways, and exporters under the aegis of the Agricultural and Processed Food Products Export Development Authority,” a ministry statement on May 12 had said.

Last year, India had exported a record 7 million tonne (MT) of wheat valued at $2.05 billion. Out of the total shipment, around 50 per cent of wheat was exported to Bangladesh in the last fiscal. Recently, Egypt, which is one of the world’s biggest importers of wheat, had agreed to source wheat from India. Egyptian authorities have put India as one of the origins for this strategic commodity. Egypt imported 6.1 MT of wheat in 2021 and India was not part of the list of accredited countries which can export wheat to Egypt. More than 80 per cent of Egypt’s wheat imports estimated to be close to $2 billion in 2021 were from Russia and Ukraine.

The world was looking to India for wheat as Russia-Ukraine war had impacted the supplies. These countries accounted for 28 per cent of the world wheat exports. This drove up the prices in country largely dependent on exports from these warring countries.

The demand for Indian wheat had come as a boost for the farmers as they were getting higher prices in the open market as traders and exporters were buying directly from them. This had led to lower procurement by the government agencies.

India had its own problem. The wheat production has been low in India due to early onset of summers. Moreover, many farmers who got lower price than the MSP in the government-designated mandis, were holding on to their produce. This led to lower wheat procurement by the government agencies. India would have surplus wheat even though production was expected to 1,050 LMT, slightly lower than the initial estimate of 1,110 LMT in financial year 2023.

As government provides free grains to over 80 crore beneficiaries under the PM Garib Kalyan Yojna and national food security act, in order to tide over shortage of wheat grain, it is replacing wheat with rice to the beneficiaries. As per a reallocation order, 55 LMT additional rice has been allocated in place of wheat in PMGKY.