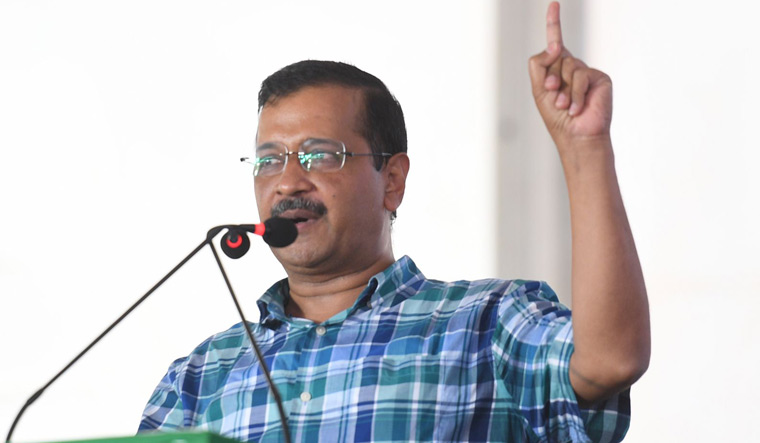 Aam Aadmi Party convenor and Delhi Chief Minister Arvind Kejriwal played the Ayodhya card in Gujarat on Wednesday as he sought votes for his party in the upcoming assembly elections in the state.

During his third visit to Gujarat after his party’s victory in Punjab, Kejriwal addressed a massive rally in Rajkot. The Delhi CM said an old lady approached him, asking whether he had been to Ayodhya. He said he told her that he has indeed visited the holy city and added that a person gets peace of mind when visiting Lord Rama’s birth place.

He said he asked the old lady to pray that this time the AAP forms government in Gujarat, and said if this happens, all mothers and elderly people of Gujarat will be taken for a free pilgrimage. He said under a scheme in New Delhi, 50,000 elderly people have been taken for pilgrimage to 12 places for free. They travel by air conditioned trains, stay in air conditioned rooms and everything is free, he added.

Kejriwal asked if the BJP in Gujarat has taken people on a pilgrimage in the last 27 years.

He reiterated the request to people of Gujarat to give AAP one chance. “If you do not like our work, then next time do not vote for us.”

Kejriwal alleged that the BJP was here to loot people, and claimed that only the AAP can provide good schools, health care facilities and jobs for youth.

The Delhi chief minister taunted the ruling BJP in the state over paper leaks and asked if they can't even hold exams well, how can they efficiently govern the state.

Kejriwal called Gujarat BJP president C.R. Patil a “thug” and asked people, who believed so, to raise their hands. As thousands of hands were raised, he asked the television channels to capture the footage. He claimed that TV channels would be shut down if they dared to show this footage.

He said the BJP and the Congress are two sides of the same coin. Kejriwal claimed that a senior Congress leader was all set to join the AAP, but the BJP called him up and asked him not to switch sides, saying the Congress is their “sister.”

“If you want rowdyism, then vote for the BJP. Vote for the AAP if you want good schools, good health care facilities and jobs for the youth,” he said.

Kejriwal said people should ask three questions to the ruling BJP— why are schools in a bad shape even after the party being in power for 27 years, why do the examination papers leak and when would the youths get jobs.