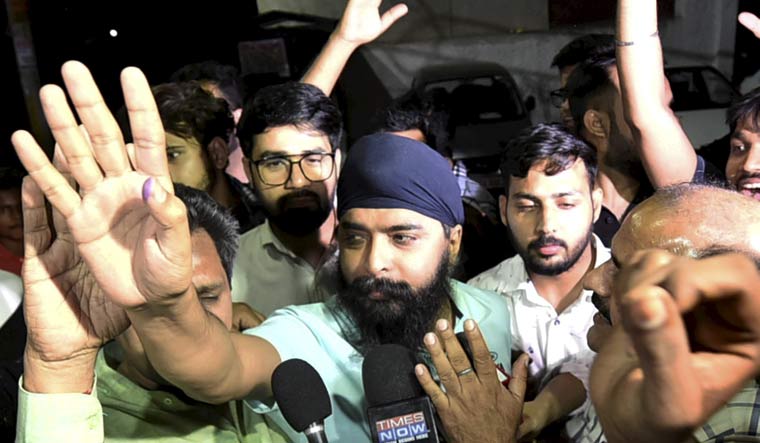 A local court in Punjab's Mohali on Saturday issued an arrest warrant against Delhi BJP leader Tajinder Pal Bagga in a case related to making provocative statements. The court order came a day after Bagga was arrested by Punjab Police leading to a high-voltage drama that drew in the police of three states and triggered a political slugfest.

The fresh arrest warrant was issued by the court of Judicial Magistrate Ravtesh Inderjit Singh.

"Whereas Tajinder Pal Singh Bagga, s/o Pritpal Singh, r/o B-1/170, Janak Puri New Delhi stands charged with the offence punishable U/Sec 153-A, 505, 505 (2), 506 IPC. You are hereby directed to arrest the said Tajinder Pal Singh Bagga and to produce him before me," the judge said in the order. The next date for the case is May 23.

The BJP leader was arrested on Friday by Punjab Police from his home in Delhi, stopped in Haryana while being taken to Punjab and brought back to the national capital by Delhi Police hours later. In a rare move, the Delhi Police also registered a case of kidnapping against their Punjab counterpart, following a complaint filed by the BJP.

The arrest has led to a massive showdown between the BJP and the AAP with the former accusing Delhi Chief Minister Arvind Kejriwal of pursuing politics of vendetta and the latter hitting back and saying the BJP leader was held for trying to stoke communal tension and violence in the border state.

The AAP rules Delhi and Punjab while the BJP governs Haryana. However, the Delhi Police comes under the Union Home Ministry and not the AAP-led Delhi government.

The case was filed against Bagga on April 1 relating to his alleged provocative remarks during a protest of the BJP youth wing outside Delhi Chief Minister Arvind Kejriwal's house.

Meanwhile, the Punjab government moved two applications before the Punjab and Haryana High Court seeking the Centre be made a party in the Bagga's arrest case. The state government has alleged that its police personnel were "detained" at Janakpuri and Kurukshetra police stations when they had gone to arrest Bagga in connection with a case registered against him at Mohali last month.