Loudspeaker issue is not a religious issue, but a social one: Raj Thackeray

'There are several temples where illegal loudspeakers are running' 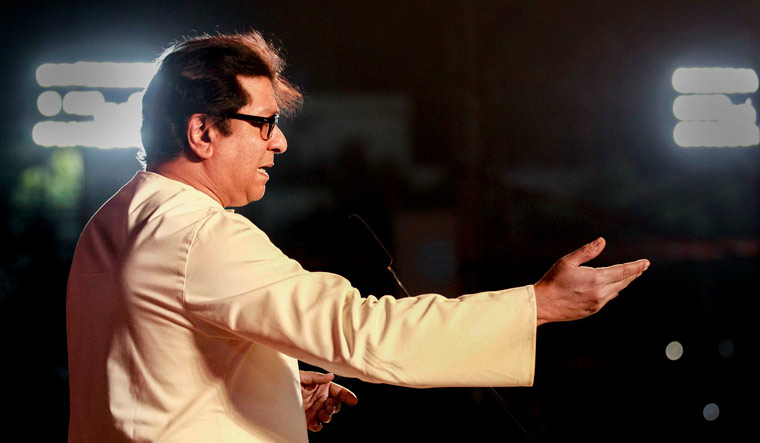 Raj Thackeray speaks during a rally in Aurangabad | PTI

MNS chief Raj Thackeray at a press conference in Aurangabad on Wednesday said, “My point is that all illegal loudspeakers should be removed from mosques, until they are removed we will continue our agitations.” “We want peace in the state. What actions you're ( police) taking on those 135 mosques that violated SC guidelines today. You (police) are only taking action against our workers,” he added.

Ahead of the press conference, the Twitter account of MNS had tweeted a link to a digital campaign for the removal of loudspeakers from mosques. Thackeray, on his personal account, had shared a video of a speech by his father Bal Thackeray on Twitter. In the speech, Bal Thackeray can be heard as saying, "The day my government comes into power in Maharashtra, [the offering of] namaz will stop on roads. Religion should not come in the way of any development. If any Hindu rituals are coming in the way of developments, we will look into that as well. Loudspeakers at mosques will be removed," in Marathi.

“My point is that all illegal loudspeakers should be removed from mosques, until they are removed we will continue our agitations,” Thackeray added. “We will continue playing Hanuman Chalisa outside mosques at the time of Azaan until all illegal loudspeakers will be removed. I have to see what Supreme Court is doing if the government is not following its order,” the MNS chief said.