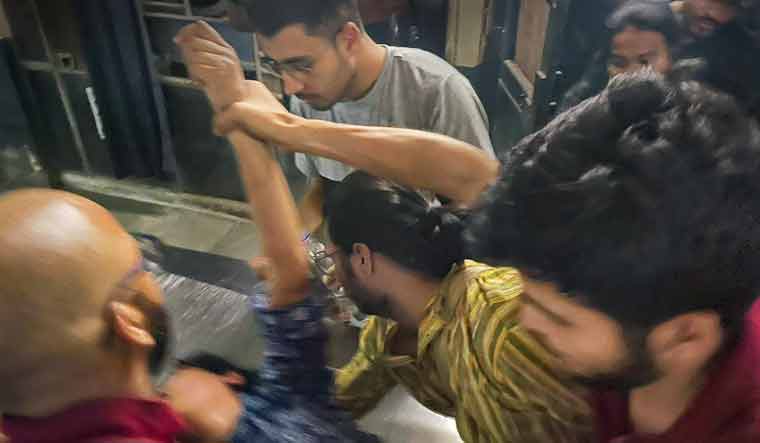 The Delhi Police stated that an FIR has been filed in the case of two groups of students clashing at Jawaharlal Nehru University's Kaveri Hostel. "We received a complaint from a group of students who are members of JNUSU, SFI, DSF and AISA early this morning against unknown ABVP students. Accordingly, we lodged an FIR under Sec 323/341/509/506/34 IPC. Further probe is on to collect evidence and identify culprits," the Delhi Police said, reported news agency ANI.

Two groups of students clashed at the Jawaharlal Nehru University's Kaveri Hostel on Sunday allegedly over serving of non-vegetarian food in the mess on Ram Navami, with police saying six students were injured in the incident. The two groups, however, claimed that over 60 students were injured from both sides. The Left-controlled JNU Students' Union (JNUSU) and RSS-affiliated Akhil Bharatiya Vidyarthi Parishad accused each other of pelting stones and injuring their members. The Left outfits claimed about 50 of their members were injured, while the ABVP said their 10-12 activists were hurt.

The JNUSU alleged that the ABVP members stopped the mess vendor from supplying chicken and attacked him in the afternoon. However, the right-wing ABVP denied the charge and claimed that Leftists obstructed a Ram Navami puja in the hostel.

The JNUSU took out a march inside the campus and then went to the Vasant Kunj police station to demand the arrest of those responsible for the alleged attack. Beating dhaplis, students marched inside the campus raising anti-ABVP slogans. They also shared videos of "ABVP activists" purportedly attacking students with wipers and sticks.

Another purported video showed "ABVP activists" raising slogans of Jai Shri Ram and creating a ruckus inside the Kaveri Hostel, which is at the centre of the scuffle. A third video showed some students attacking a vendor who had gone to the mess for supplying chicken.

The ABVP also marched inside the campus to protest against Left outfits.