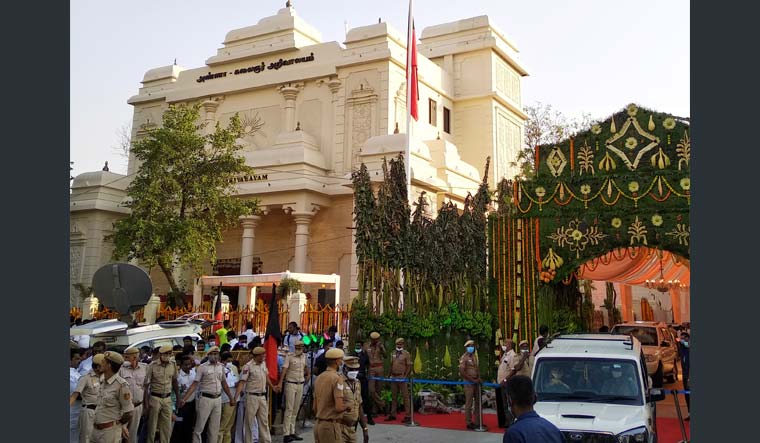 Leaders from the TMC, TDP, CPI, BJD and SAD were also among those present as the DMK office was inaugurated by party chief and Tamil Nadu Chief Minister MK Stalin with  Sonia Gandhi cutting the ribbon for one of the sections of the office.

The Congress and the DMK are in alliance in Tamil Nadu.

While TMC was represented by Mahua Moitra and TDP by Rammohan Naidu and K Ravindra Kumar, D Raja from CPI, Amar Patnaik from BJD and Harsimrat Badal from SAD also attended the event.

Several ministers in the Tamil Nadu government, MPs of the DMK from both Houses and Stalin's son Udhayanidhi Stalin were also present.

Billing it as an event that would write the history of southern India from Delhi, Stalin had said it is a "compelling symbol" of the vital space in national politics for his party, its policies and the vehicle to implement it, the Dravidian model'.

In an open letter to DMK workers, Stalin had hailed the new office christened Anna-Kalaignar Arivalayam' as a Dravidian fort and had invited leaders from almost all parties, including top leaders of the BJP and other non-UPA parties.