We are eager to do more on defence side with India, says US top official Nuland

Nuland said it is very important for democracies to stand together 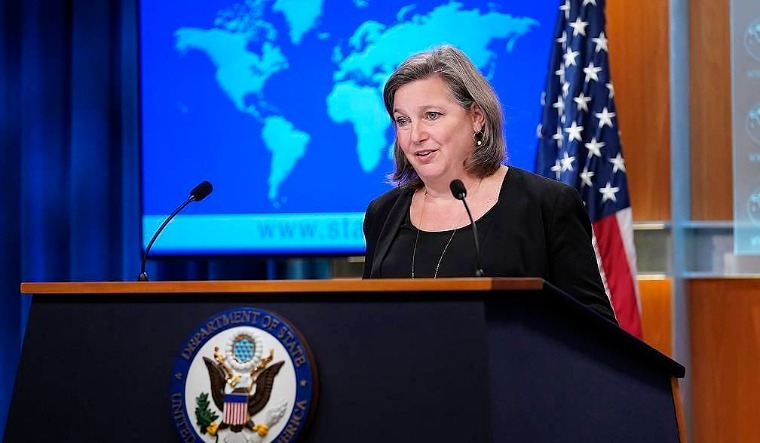 In conversation with The Indian Express, US Under Secretary of State for Political Affairs Victoria Nuland said that the US understood India's position vis-a-vis Russia, but that the US was very eager to ensure that India is weaned off the Russian weapon dependency as soon as possible.

In the interview, Nuland said that, as the autocracies tighten their relationship, to break the rules of the international system that have favoured India and the US, it is very important for democracies to stand together. "We feel a real understanding and evolution in India’s position, but you have a historical relationship [with Russia]. Besides historical ties, India’s dependence on Russia for defence supplies is crucial. Among the things we talked about is this legacy of security support from the Soviet Union and Russia at a time when the US was less generous with India. Now, of course, times have changed and we are very eager to do more and more on the defence side with India," Nuland said.

In response to a question about China and Russia possibly coming together, Nuland said the worry now is that they intensify their efforts together, and they learn from each other, whether it is how to coerce a neighbour economically, or militarily.

External Affairs Minister S. Jaishankar on Tuesday said he held a "good discussion" with Nuland on issues like ways to expand bilateral ties, Indo-Pacific and the Ukraine situation. The discussion came a day after delegation-level talks between Foreign Secretary Harsh Vardhan Shringla and Nuland, who is on a three-nation tour of India, Bangladesh and Sri Lanka. "Pleased to meet @UnderSecStateP. Good discussion on expanding our bilateral cooperation, on South Asia, Indo-Pacific and the Ukraine situation," Jaishankar tweeted after the meeting. A statement issued after the Shringla-Nuland talks held under the framework of India-US Foreign Office Consultations (FOC) had said both sides looked forward to the India-US 2+2 ministerial meeting. The 2+2 defence and foreign ministerial talks were originally slated to be held in November.