Ukraine crisis has its roots in post-Soviet politics: Jaishankar 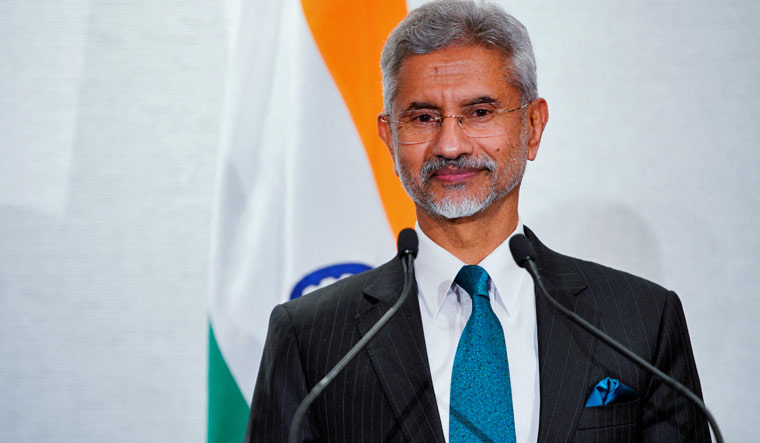 The situation in Ukraine has its roots in post-Soviet politics, the expansion of NATO and the dynamics between Russia and Europe, External Affairs Minister S Jaishankar said, amid escalating tension between Moscow and the West after Russian President Vladimir Putin recognised two breakaway Ukrainian regions as independent states.

In an interactive session at a think-tank in Paris, he said on Tuesday that the world today is in the midst of "multiple crises" and these developments have generated new challenges to the international order.

Separately in an interview published in French daily Le Figaro on Monday, Jaishankar said that the situation in Ukraine is the result of a complex chain of circumstances over the last 30 years and most countries are seeking a diplomatic solution.

"The situation in Ukraine is the result of a complex chain of circumstances over the last 30 years. Most countries, such as India and France, which are very active, are seeking a diplomatic solution," he said.

"The real question is: are you mobilised to find a good solution or are you content with posturing? India can talk with Russia, with other countries, within the UN security council and support initiatives like those of France," Jaishankar said when asked why India has not condemned the concentration of Russian troops on the Ukrainian borders.

In his address at the French Institute of International Relations, Jaishankar extensively delved into fast-expanding Indo-French ties and said India looks at France as a "trusted" partner in countering myriad security challenges from the seabed to space and from cyber to oceans.

"I can assert with genuine confidence that it (Indo-French ties) are the strongest now since our journey as an independent nation began 75 years ago," he said.

"Through the tumult of our times, India's relations with France have continued to move forward on a steady and clear course. It is a relationship that is free from sudden shifts and surprises that we sometimes see in other cases," he added.

He had also referred to France showing an understanding of India's "strategic compulsions" after its nuclear tests in 1998.

"French support played an important role in India getting an exemption from the Nuclear Suppliers Group in 2008 to resume international cooperation in civil nuclear energy," he added.

Asked to compare the Ukraine crisis with the situation in Taiwan, Jaishankar said different problems have different histories, different contexts and players and transposing issues of one theatre to another can be misleading.

"Both are products of very complex histories of that particular region. In the case of Ukraine, a lot of it derives from the post-Soviet politics, the expansion of NATO, the dynamics between Russia and Europe, and Russia and the West broadly," he said.

"I think, in the case of Taiwan, it is a product of what happened in Chinese history and what happened the way the Cold war and other developments played out in Asia," he said.

On the eastern Ladakh border standoff with China, Jaishankar said that both sides held 13 rounds of military talks and as a result of that significant headway has been made in many of the friction points.

At the same time, he said there are some friction points that remained to be resolved.

Jaishankar said India is absolutely clear that it will not agree to any change in the status quo and will not accept any attempt to change the Line of Actual Control unilaterally.

"So however complex it is, however long it takes, however difficult it is, that clarity is what guides us and I would say other than optimism, it is also very important to have perseverance," he said replying to a question on whether he was optimistic about the resolution of the row.

Asked about India's views on trilateral security grouping AUKUS (Australia, the UK and the US), Jaishankar did not give a direct reply.

He said it is important that democratic countries with shared values and interests work together with a cooperative spirit.