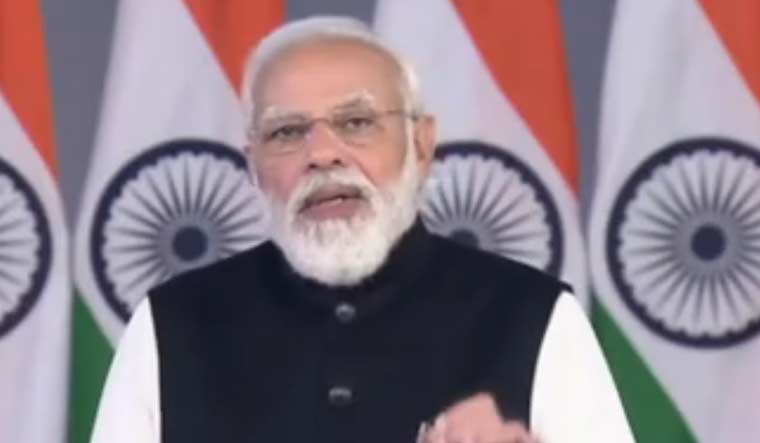 Addressing the virtual session of the World Economic Forum (WEF) Davos Agenda, Prime Minister Narendra Modi delivered the “State of the World” special address, where he hailed India’s accomplishments during the pandemic.

The speech was briefly interrupted after Modi stopped to ask whether he was audible. Then, the WEF president Børge Brende took over to deliver a brief speech commending India for its achievements during the pandemic, including offering vaccines for the world and creating 46 new unicorn companies, as well as its leadership of the International Solar Alliance and India’s pledge at COP26.

In Modi’s speech, he hailed the temperament and talent of the people of India. India administered 160 crore COVID-19 vaccine doses over the last year, and provided food grains to 80 crore people. He said India gave the world a “bouquet of hope”, following the vision of "One Earth, One Health" and provided medicines and vaccines to several countries during the pandemic.

He said India's resilience was an example to the world, with the IT sector working round-the-clock to save the world. "Over 50 lakh software developers are working in India," Modi said. He added that India had the third-most number of unicorn companies, with over 10,000 startups registered in just the last six months.

The prime minister touted India as a great place to do business, saying now was the best time to invset in the country. India used to be known for its "license raj", he said, adding that it was now improving the ease of doing business, simplifying tax structures and making improvements in the context of retrospective tax. $26 billion has been allocated as part of the production-linked incentive schemes in 14 sectors, the PM said.

Modi said that while the world was focusing on interventions like quantitative easing during the pandemic, India was paving the way for reforms, giving “unprecedented speed” to digital and physical infrastructure.

Modi also referenced India's strides towards climate-friendly policies, noting that 40 per cent of India's energy needs were being met by renewable sources.

Chinese premier Xi Jinping, who addressed the WEF before Modi, had warned the US and Europe against raising interest rates too quickly, saying this would “slam the brakes” on the world’s recovery from the pandemic. Jinping called for central banks to maintain their monetary stimulus policies or risk “serious economic consequences” which he said could spillover onto developing markets.