‘I have also been chief minister. We never accepted ugly politics of this kind’ 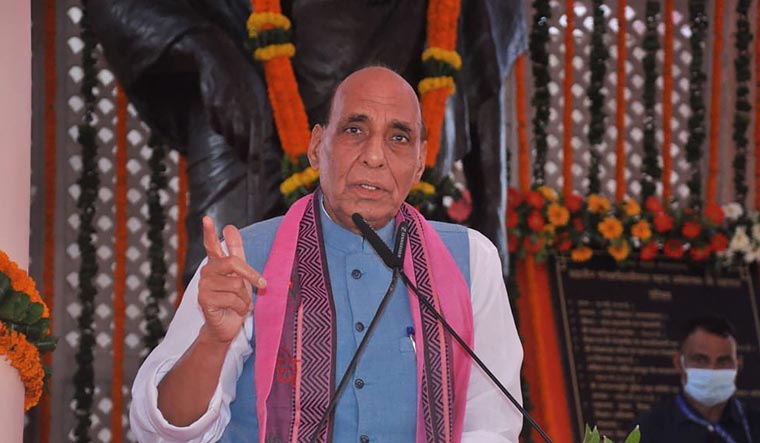 Holding the Congress government in Punjab responsible for Prime Minister Narendra Modi's security breach on the way to Ferozepur, Defence Minister Rajnath Singh said on Thursday that the party cannot be forgiven for the serious lapse.

Singh said a prime minister represents the country and his office is an institution which everyone should respect.

"The Congress is in power in Punjab. Could we have imagined a security breach in the prime minister's convoy like the one that happened there yesterday (on Wednesday)?" he asked.

"If we cannot ensure safety of institutions like that of the prime minister, it would be difficult to prevent disintegration of the country's democratic institutions," Singh said addressing the BJP's concluding Vijay Sankalp rally in Uttarkashi.

Modi's convoy was stranded on a flyover due to a blockade by protesters in Ferozepur on Wednesday after which he returned from poll-bound Punjab without attending any event, including a rally.

The Union home ministry directed the state government to file an immediate report, saying it did not ensure the required deployment, while Home Minister Amit Shah said such dereliction of the security procedure during the prime minister's visit is totally unacceptable and accountability will be fixed.

"I have also been chief minister. We never accepted ugly politics of this kind," Singh said and asked people if the Congress can be forgiven for what happened to the prime minister's security in Punjab.

He also attacked Congress campaign head for Uttarakhand Harish Rawat for saying that Modi keeps visiting the state for marketing.

The minister accused Rawat of trying to grab credit for Kedarnath reconstruction by saying that Modi was meditating in a cave built during his chief ministership.

"If that is true, why couldn't you ever pluck the courage to meditate in that cave?"

"I have never levelled unfounded allegations against any of our prime ministers, be it Jawaharlal Nehru, Indira Gandhi, Rajiv Gandhi, Manmohan Singh or Deve Gowda because the prime minister's office is a democratic institution which should be respected by all," the Union minister said.

"If we had gone to polls projecting someone as the chief ministerial candidate, we would not have changed him. The party fought the polls and made whoever it thought was right for the job of the CM. It is the party's internal matter.”

"A national party has many things to take care of. Whose services are needed for the organisation and whose for Parliament... We may change our chief minister 10 times if we so wish. Why should it bother you?"

Singh said the difference between the BJP and other parties is that there is no gap between what the BJP says and what it does.

Citing the examples of revoking Article 370 in Jammu and Kashmir and the Ram temple being built in Ayodhya in support of his argument, Singh sought another term for the BJP to make Uttarakhand a model state under the leadership of Modi as envisioned by former prime minister Atal Bihari Vajpayee.