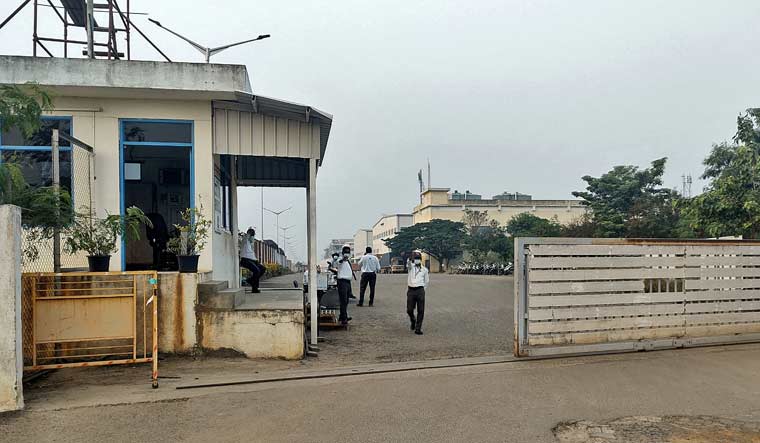 (File) Private security guards stand at the entrance of a closed plant of Foxconn India, which makes iPhones for Apple Inc, near Chennai | Reuters

Days after Apple Inc placed the Sriperumbudur facility of their supplier Foxconn under probation, an internal intelligence note exclusively accessed by THE WEEK pointed out “Chinese aid to the left leaning workforce inside Foxconn” as the reason for the labour unrest.

The report stated that “the knee-jerk reaction to the substandard canteen food causing ill health to a few staff members is an indicator of an international design to destabilise industrial establishments”. The note also says that “it is no secret that China was aggrieved over these factories, as, earlier, 48 per cent of the components for Apple iPhone were produced in China". But, "Apple has increased its stable of contracts with manufacturers in India of late as the US-China feud threatened to impose tariffs on Apple devices”, reads the intelligence note. Also the note further states that "China’s supply chain got tangled in the US-China trade war" due to India emerging as a manufacturing alternative for Apple and other multinational tech firms.

Foxconn is one of the Taiwanese companies in India. The list includes Wistron Infocomm manufacturing India at Narasapura in Karnataka and Pegatron technology Pvt Ltd at Mahindra City near Chennai. Recently, Wistron too had shut down the production due to an assault and violence allegation inside the factory.

The intelligence note points out the same pattern of unrest in multinational companies like Sanmina, Ford, PPG Asian paints, Enfield India Limited among others. Also the note names a few other companies in Sriperumbudur, saying that “the group is making all efforts to intrude”. The note also suggests that necessary counter measures should be taken at the highest level to “thwart nefarious activities”.

The multinational electronic company Foxconn, according to trade unionists, did not allow labour unions inside the facility, and those involved in union activities did not have job security. Apparently, the issue, according to the intelligence note, was that the “left leaning forces" capitalised on the wretched working conditions inside the facility. It further stated that the New Democratic Labour Front, Peoples Democratic Youth Association, Peoples Rights Protection Centre and Students Uprising Movement took the agitation forward.

Sources in the Tamil Nadu government say that the involvement of these movements in the agitation, and also their links to movements outside India, is being probed. When THE WEEK reached out to Venkata Naga Narasimhan, a trade unionist who is said to have been one of the frontline organisers of the labour agitation at Foxconn, he denied his involvement in the agitation, saying that he "is a journalist and just reported as it happened". Venkata Narasimhan said that he works for Thozhilalar Koodam, a left-leaning newspaper, and has no direct involvement in the protest. But, when asked about his knowledge on the employees returning to work, he said "the working conditions are wretched and some of the employees may not return unless it is resolved".

On the other side,  the Tamil Nadu government, after a high-level team consisting of ministers and senior officials visited the Foxconn facility, urged the Taiwanese manufacturing company to improve the working conditions. The team had recommended that the employees should be given access to proper washrooms, adequate drinking water, 50 square feet space for every employee in the hostel and inverters to combat any power disruption. The government, based on these recommendations, urged Foxconn to ensure that each employee gets access to at least four litres of drinking water a day, adequate washrooms to avoid infections and proper fencing and security arrangements in the premises that house women employees.

Foxconn also agreed to improve the working conditions, after talks with the representatives from the state government. "We had given a set of suggestions to the Foxconn management, and they have assured us that they will follow it," Labour minister C.V. Ganesan informed the media.

As long as the labour union activities in the Sriperumbudur region were under the control of CITU, such problems did not come up. CITU is the trade union wing of the CPI(M). This time around, the CITU doesn’t have a say in the labour unrest in the Foxconn issue. “The immediate provocation was that there were severe infections and a few employees died,” points out K. Kangaraj, state secretary of the CPI(M). When asked if there is a Chinese hand in the agitation, Kanagaraj ruled it out, saying: "This is the reason given to hide the unfair labour practices followed inside the manufacturing facility.”

It may be recalled that in December 2014, when Foxconn came up with a proposal to suspend its operations, the then Foxconn India employees union threatened to launch a protest. In 2014, Foxconn was one of the major handset manufacturers for Nokia. Incidentally it was during the same period that Sriperumbudur witnessed a major labour unrest after Microsoft, which bought Nokia’s handset business for over $7 billion, suspended its operations due to tax dispute.

Sriperumbudur is one of the most vibrant industrial corridors in Tamil Nadu. The recent episode may send across a message that India is not a conducive destination for multinationals.

Earlier, Ford had opted to shut down its production in Chennai and moved out of India. The state government is monitoring the situation and the Tata group is in talks with Ford. India is one of the three countries manufacturing Apple products, apart from Brazil and China. The labour unrest, and the shutting down of the Foxconn facility, may not help the “investor friendly” USP of the Tamil Nadu government.