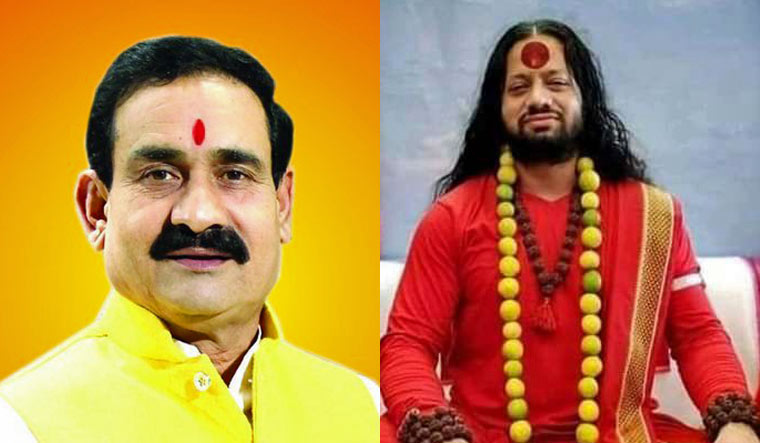 Hindu religious leader Kalicharan Maharaj, on whom a case of sedition has been registered in Raipur for using abusive language against Mahatma Gandhi, was arrested from near Khajuraho in Madhya Pradesh by Chhattisgarh police on Thursday early morning.

Kalicharan was staying in a rented room in Bageshwar Dham, about 25 km from Khajuraho in Chhatarpur district of MP when he was arrested by Chhattisgarh police. The religious leader was absconding since December 26 night when an FIR was lodged in Tikrapara police station of Raipur.

Cases have also been registered against the religious leader in Pune and Akola of Maharashtra for other objectionable statements there.

However, politics has started raging over the comment with Madhya Pradesh home minister Narottam Mishra objecting to the arrest process of Chattisgarh police. Mishra has said that the arrest without prior information to MP Police is a violation of inter-state protocol and against the federal system.

“They could have issued a notice for him (Kalicharan) to appear. I have asked the MP director general of police to speak to his counterpart in Chhattisgarh to register an objection and seek clarification on the arrest process,” Mishra said.

Chhattisgarh chief minister Bhupesh Baghel has shot back asking Mishra to clarify whether he was happy or unhappy at the arrest of the abuser of Mahatma Gandhi. Baghel said that the arrest was as per law and no processes were violated. “If anyone uses abusive language against Mahatma Gandhi who gave messages of non-violence, peace, brotherhood, love, truth, non-violence and equity to the world, there will be action against them and the Chhattisgarh police has taken this action. We have informed the family and the lawyers (of Kalicharan). He will be presented in the court within 24 hours.”

Madhya Pradesh Congress has attacked Mishra for his stand. Spokesman K.K. Mishra said that the statements of the home minister were unfortunate. “He seems to be protecting criminals on the basis of politics. Is this constitutional behaviour? Home minister should clarify if he supports Kalicharan's statements.” Mishra tweeted.

Another spokesman Narendra Saluja congratulated the Chhattisgarh police for the arrest and added that it was shameful that the MP home minister was questioning the arrest. “Normally, MP police should have arrested him (Kalicharan), but it seems they were sheltering him,” Saluja said.

An FIR had been registered against Kalicharan, a religious leader from Maharashtra, on December 26 night at Tikrapara police station in Raipur under Indian Penal Code sections 505 (2) (statements creating or promoting enmity, hatred or ill-will between classes) and 294 (obscene acts), after a complaint lodged by Congress leader Pramod Dubey. Later other charges including that of sedition (section 124 A) were also added in the FIR.

The complaint pertained to Kalicharan's use of abusive language against Mahatma Gandhi during the conclusion of a Dharma Sansad in Raipur on Sunday evening. Kalicharan had used abusive words to say that Gandhi had destroyed the nation. The religious leader also hailed Nathuram Godse for killing the Mahatma. Kalicharan said the objective of Islam was to capture nations through politics and we saw in 1947 how it captured Pakistan and Bangladesh. He also said that only staunch Hindu leaders should be elected to protect the nation. A video of his statements had gone viral leading Congress leaders to register FIR on him in Raipur.

After the FIR was registered against him, Kalicharan released a video message saying that he did not repent his statements as he hated Gandhi and his heart was full of disdain against him (Gandhi). He hailed Godse as Mahatma again and said that he offered thousands of salutations to him. Other sections added in the case are 153 A (1)(A), 153 B (1)(A) for promoting enmity on religious grounds, 295 A for insulting religious feelings and 505(1)(B) for causing fear and alarm inducing people to commit an offence against the state or public tranquillity.