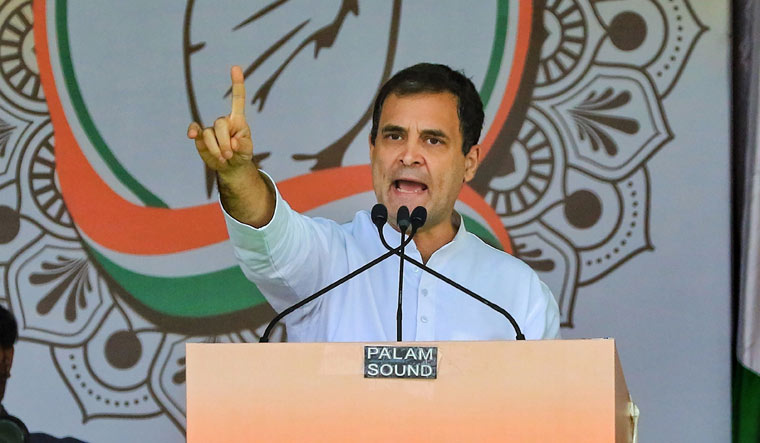 When former Congress president Rahul Gandhi on Sunday sought to draw a contrast between 'Hinduism' and 'Hindutva', a topic that he has been emphasising upon in recent times, he betrayed his party's difficulties in a political arena that is dominated by majoritarian politics. It also put into focus its risk-laden efforts to mix religion with politics.

At a massive rally organised by the Congress in Jaipur, which was albeit held to protest against the Narendra Modi government's failure to rein in inflation and attended by most senior party leaders, Rahul's Hinduism vs Hindutva remark ended up being the highlight. The comment overshadowed the Congress's anti-price rise articulation since it touched upon a topic that evokes strong sentiments both within and outside the party.

“In the politics of our country, there is a clash between two words... One of the words is 'Hindu'. The other is 'Hinduvawadi'. They are not the same thing... I am Hindu, but I am not Hindutvawadi,” he said. Seeking to differentiate the two, he further said that Mahatma Gandhi was Hindu, but Nathuram Godse was Hindutvawadi.

Rahul's remarks reflect his party's efforts to deal with the success that the BJP-RSS have gained in recent times in equating Hindutva with the interests of the majority community, thereby seeking to project the political parties on the other side of the ideological divide as anti-Hindu.

The former Congress president's emphasis upon the distinction between Hinduism and Hindutva is perceived as an effort to convey a message to the majority community that the grand old party is not anti-Hindu on account of being the ideological counter of the BJP-RSS. Rahul's argument is that Hindutva is a political stratagem that does not make a party a natural representative of a community. Also, going by the same argument, the party cannot portray its rivals as anti-Hindu.

The remarks also have to be seen in the context of the perception, which the BJP has gladly stressed upon in elections, that the Congress has indulged in minority appeasement. Rahul and other party leaders have, in a bid to break free from the perception, talked about their Hindu identity and engaged in gestures such as visiting temples and taking part in religious ceremonies.

While it may be an effort to break free from the perception of being detached from the interests of the Hindu community, the Congress leader runs the risk of falling into the BJP's trap of the political discourse getting centred around the question of religion.

The Hindu outreach of Rahul and his party have been dubbed as soft-Hindutva, defeating the purpose of the initiatives. Even voices within the party have wondered if such efforts would result in the Congress ending up as a poor copy of the BJP, and the question asked is why people would prefer a duplicate over the original.

There is a view that it may not be politically prudent to get embroiled in the religion debate when more pressing issues such as price rise and unemployment need to be focussed upon. And the counterview is that majoritarian politics is the elephant in the room which cannot be ignored.

For the Congress, the question of politics and religion is a choice between the devil and the deep sea.