Need to throw out Hindutvavadis, bring back rule of Hindus: Rahul Gandhi

He was speaking at a massive rally organised by the Congress in Jaipur. 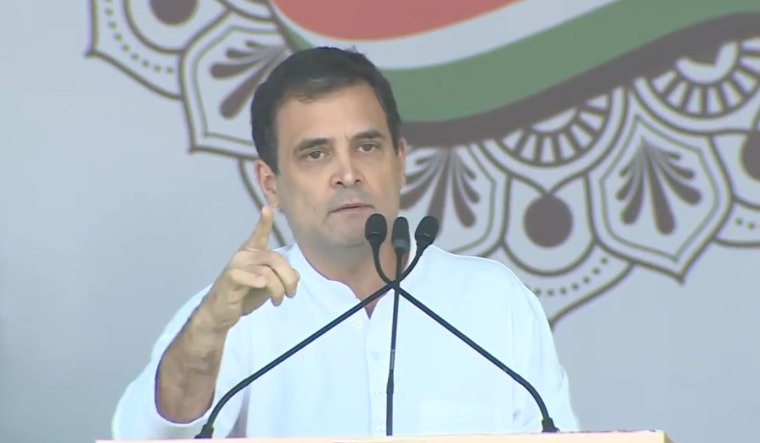 Former Congress president Rahul Gandhi on Sunday attacked the BJP's ideology of Hindutva and alleged it was aimed only at pursuit of power.

Rahul was speaking at a massive rally organised by the Congress in Jaipur.

Rahul was quoted by ANI as saying “In Indian politics today, there is a competition between two worlds: Hindu and Hindutvavadi (adherent to Hindutva). The two words have different meanings. I am Hindu but not Hindutvavadi... Mahatma Gandhi was a Hindu but Godse was Hindutvavadi.”

Rahul defined a Hindu as “one who embraces everybody, fears nobody and respects every religion”.

Seeking to differentiate between Hindutva and Hinduism, Rahul said, “Hindutvavadis spend their entire life in search of power. They want nothing but power and can do anything for it. They follow the path of 'Sattagrah', not 'Satyagrah'. This country is of Hindus, not of Hindutvavadis.”

He declared, “Hindutvavadis only want power and they are in power since 2014. We need to throw these Hindutvavadis out of power and once again bring back rule of Hindus.”

In addition to Rahul, his sister Priyanka Gandhi Vadra and their mother Congress chief Sonia Gandhi were present at the rally in Jaipur, which was organised to protest against inflation under the Narendra Modi government. In her speech, Priyanka accused the government of spending money on advertisements. She said, “Today's government at the Centre is only about lies. This government is working for a few industrialists. The amount of money they spend on advertisements… why don't they give it to the farmers?”

She declared, “You are here today because an LPG cylinder costs around Rs 1,000, mustard oil costs around Rs 200 per litre, petrol and diesel prices are rising, and no one is listening to the troubles being faced by the common man.”