After ending protests, farmers to take out victory march today 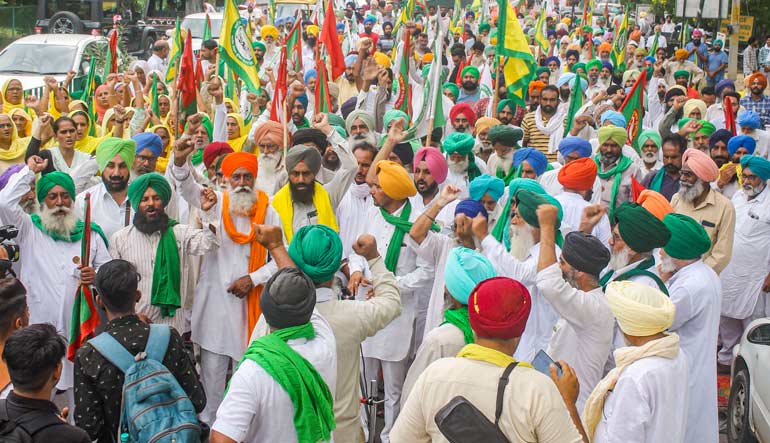 Farm leaders and farmers stage a protest over violence in Lakhimpur Kheri on Sunday, in Patiala | PTI

Protesting farmers from along Delhi's borders will take out a victory march today as they return to their villages in Punjab and Haryana, reported NDTV. The protests, which had lasted for over a year, had forced the Central government to withdraw the three contentious farm laws. Punjab Chief Minister Charanjit Singh Channi on Friday said the state government will welcome the sons of the soil on their victorious return from the Delhi borders.

Congratulating farmers, farm labourers and the Samyukt Kisan Morcha leaders, the CM said it was a victory of the people, and that the unity of various sections of the society forced the Modi government to roll back the draconian black laws.

Channi said even though they did not pay any heed to the demands of the farmers for almost a year, the BJP leaders now wanted to encash the victory of the farmers and were trying to use it as an electoral card in Punjab. The chief minister said farmers and people of the nation will never forgive the Modi government and its leaders for testing their patience for more than one year. He said it was not an easy victory for farmers as more than 700 of them sacrificed their lives during the agitation.

Channi said the government has always stood by the farmers and labourers and extended every possible help to them in their historic and noble cause. He said the government has given jobs and financial assistance to the family members of around 350 farmers who lost their lives during the agitation and the remaining families will also be compensated soon.

The SKM, an umbrella body of 40 farm unions, on Thursday decided to suspend the over a yearlong farmers' movement against three contentious farm laws and announced that farmers will go back home on December 11 from protest sites on Delhi's borders.

The announcement came after the SKM received a Central government signed letter where it agreed to consider their pending demands, including withdrawal of cases against farmers and formation of a committee on the Minimum Support Price (MSP).