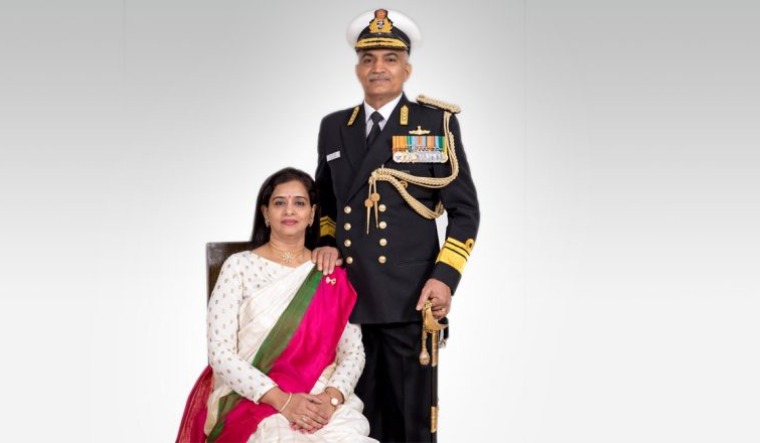 R. Hari Kumar with his wife Kala Nair | Via onmanorama

Admiral R. Hari Kumar took over as the 25th chief of the Indian Navy on Tuesday. He succeeded admiral Karambir Singh.

Hari Kumar, who joined the Navy on January 1, 1983, is the first Malayali to become the chief of naval staff. Admiral Sushil Kumar, who had roots in Kerala, was Navy chief between 1998 and 2001. He was a native of Neyyoor, Nagercoil, in Kanyakumari district, Tamil Nadu.

Close on the heels of the announcement regarding Hari Kumar's appointment, President Ram Nath Kovind had decorated him with the Param Vishisht Seva Medal, in recognition of his “peace-time service of the most exceptional order,” spread over a career spanning 38 years.

Hari Kumar spoke to Manorama about his life and career.

Hari Kumar told Manorama, “I am the eldest of three brothers. I studied at Sacred Heart Convent in Thanjavur, Tamil Nadu, till Class 5. Later, we siblings, along with our mother, shifted to Thiruvananthapuram seeking better education facilities. The shifting posed the first challenge in my life. Getting an admission to a school in another state was not easy in those days. I still remember returning disappointed from several schools after failing to get admitted to Class 6.”

He recollected his parents were worried that he may not get a seat to continue his education. “As we were fast losing hope, the management of the Carmel Convent School in Vazhuthacaud offered to take me in as a separate private student, who would not be allowed to attend the class along with other pupils. The school agreed to accept me as a regular student if I cleared an exam after six months. I passed the exam, and completed class 6 and 7 from Carmel. I will forever remember the school management's kindness, agreeing to admit me. That incident, however, taught me a lesson: Existing laws should be creatively used to help others,” the admiral said.

He added he still followed this rule in his office and encouraged colleagues to follow suit.

Making of a good human being

Hari Kumar cannot recall his days at Mannam Memorial Residential School at Neeramankara in Thiruvananthapuram, without remembering a piece of advice American academic and administrator Charles Madison Sarratt (1888–1978) had passed on to his students.

“The teachers at Mannam Memorial taught us to become good human beings. My batch passed SSLC in 1977. Several of my classmates later held top positions in their respective fields,” Hari Kumar said.

A letter used to arrive at B. Vijayalakshmi's address in Thiruvananthapuram every Friday without fail from the National Defence Academy in Pune during the late 1970s and early 1980s.

The Friday mail was a promise NDA cadet R. Hari Kumar had made to his father M. Radhakrishnan Nair, who asked his son, who was leaving for Pune, to ensure that his mother heard from him every Friday.

The son, who had not stayed away from his mother till then, wrote in detail about his life in Pune. The mother, too, replied regularly. At times, the teenager received his favourite snacks, too, through post.

After graduating from the NDA, Hari Kumar was commissioned into the Indian Navy. Hari Kumar says it was not his ambition to join the military.

“I did not nurture an ambition to join the armed forces during my school days. My aim was to either secure an IIT seat, or join the engineering college in Thiruvananthapuram. But life had something else in store for me. My maternal uncle wing commander S.K.J. Nair, my cousin captain H. Muraleedharan of the Indian Army, and friend major general R.P. Bhadran inspired me to join the force. They encouraged me to sit for the National Defence Academy entrance exam.”

He remembered clearing the NDA exam while pursuing his pre-degree course. “My parents were initially not keen on allowing me to join the armed forces. But I was tempted by the possible adventures the force would provide. I was keen on joining the Navy. Later, my parents conceded,” the admiral revealed.

The interview was at Bhopal. Vijayalakshmi recalls seeing Hari Kumar off at the Thiruvananthapuram Railway Station.

“Hari was used to travelling alone even from his childhood. He had shouldered collective responsibilities in addition to those as the eldest son in the family. He took care of his siblings, and oversaw the maintenance of land. We had a piece of land a bit far away. Initially, the two of us used to take the bus there. When he was in class 9, Hari suggested that I stay at home, and offered to take care of the property all by himself,” Vijayalakshmi recollects.

Hari Kumar continued, “I insisted on travelling alone to Bhopal, and returned after clearing the interview and medical test. I found a place in the UPSC merit list, and joined NDA in Pune in 1979. The first year at NDA was particularly difficult. The other students were from the Sainik Schools. I even doubted whether I had made a wrong decision. It, however, did not linger in my mind for long. I gradually got on track.”

Hari Kumar married Kala Nair of Haripad in 1989 and soon had to handle the challenges faced by a military husband.

“I never had to be tense over family matters, which Kala balanced well along with her teaching profession. She helped me focus my energy and time on my naval duties. I was part of the Navy deployed for the United Nations Operation in Somalia (UNOSOM). I left home promising to come back after 45 days, but could return only after six months. When our daughter, Anjana, was born, I was on a mission at sea. I couldn't be with my family, and I still regret it. Anjana is now in Auckland, New Zealand, with her husband Jai Vijay. Both of them are software engineers,” Hari Kumar said.

Hari Kumar became a granddad in 2020. The COVID-19 travel restrictions have prevented him from meeting his granddaughter, Akshara, in person. He is longing to meet her soon.

“I enjoyed each day I spent at sea. I was fortunate to captain ships in all the ranks I had held. Being a captain is the most challenging, but the most desired, position in the Navy. The captain is responsible for maintaining the battle readiness of the vessel, self-confidence of the sailors, security and all other matters pertaining to the ship he commands. The captain is also responsible for mistakes committed by any crew member,” he said.

Hari Kumar said the first ship under his command was a Coast Guard vessel. “I was then a sub-lieutenant. Later, I captained warships INS Nishank, INS Kora, INS Ranvir and the aircraft carrier INS Viraat. My favourite is INS Ranvir. It was like a family aboard the ship. I was the junior-most member on board INS Ranvir when she was brought to India from the erstwhile USSR in 1986. After 21 years, I returned to the vessel as her captain in 2007. The ship was undergoing maintenance when I took charge. The memories of launching the modernised Ranvir, conducting various trials and participating in exercises are dear to me. I cherish them a lot. I was the captain when the BrahMos missile was successfully test-fired from Ranvir in 2008,” the admiral remembered.

A town in motion

Hari Kumar recalled the Viraat had 55 years of service when he took charge as her commanding officer. “More than 1,200 crew members were on board the ship. I used to pray for the safe return of aircraft each time they took off on missions. The flight missions at night were the most challenging ones. Viraat was like a town always on the move. I was sad when Viraat, once the pride of the Navy, was scrapped. Ships, too, step aside for new ones like sailors replacing old hands.”

INS Vikrant, manufactured at the Cochin Shipyard, will be inducted into the Navy by August after undergoing trials.