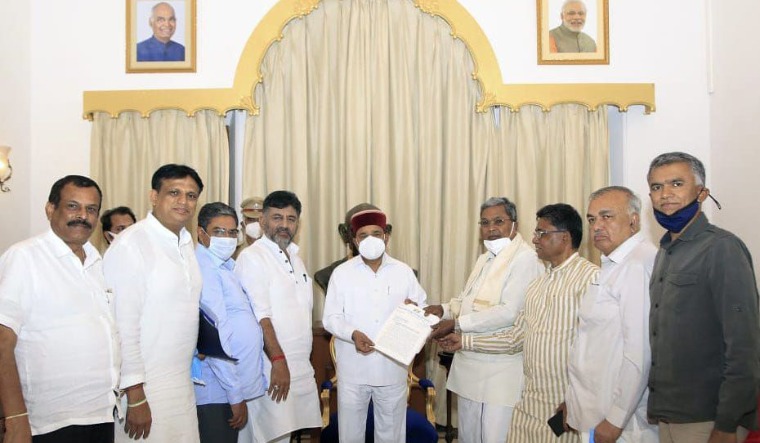 The Congress delegation with the governor | Twitter handle of D.K. Shivakumar

A delegation of the Congress, led by Karnataka party unit chief D.K. Shivakumar and CLP leader Siddaramaiah on Thursday met Governor Thawarchand Gehlot and submitted a memorandum seeking imposition of President's Rule in the state.

The Congress leaders cited a letter (dated July 6, 2021) written by the Karnataka State Contractors' Association to Prime Minister Narendra Modi on “rampant corruption” in the various departments of the state government. The Congress stated that the contractors had complained of having to pay “40 per cent commission” to ministers, legislators, MPs and officers for every work awarded to them. But Modi had remained silent and taken no action against the corruption in the BJP government, the Congress alleged.

The opposition party also demanded a judicial probe by a sitting justice of the Supreme Court into the allegations of corruption made by the Contractors' Association and also into the BDA scam unearthed by the Anti-Corruption Bureau. They demanded an FIR be registered based on the contractors' letter to the prime minister and against all the persons involved in corruption.

The Congress emphasised that the elected government—which prepares an annual financial statement of the estimated receipts and expenditure of the state every year and gets the approval of both houses of the legislature and the governor—was the custodian of the consolidated fund.

“Our state’s financial statement of 2021-22 is about Rs 2.47 lakh crore. Accordingly, the money has to be spent by the various departments of the state in accordance with the provisions of law. The funds need to be spent for the welfare of the people and for the development of the state. But the Contractors Association's letter states that there is rampant corruption in various departments such as public works, minor and major irrigation, panchayati raj, health and medical education and BBMP. And for every work, the contractors have to pay more than 40 per cent commission to some of the concerned ministers, Legislators, Lok Sabha members and other officials of the concerned departments. This is clearly a bribe as for the provisions of law,” the memorandum stated.

“The total estimated expenditure in 2021-22 budget is Rs 2.47 lakh crore. Of this, Rs 1.5 lakh crore is spent on paying the salaries, pensions and repayment for previous borrowings and Rs 1 lakh crore is left for development work. Out of the total budget released for a project, more than 40 per cent goes to paying bribes, 12 to 28 per cent as GST, 5 to 6 per cent as EMD and FST. If the contractor raises a loan to carry out any such project work, he has to pay at least 12 per cent interest on the investment. In such a situation, what money is left with the contractor to complete the work?” asked the Congress.

Stating that the percentage of commission/kickbacks was a bribe and led to money laundering, the Congress said the silence of the prime minister and law enforcement authorities (ED, I-T department and the police) was a cause for concern among the citizens.

Citing media reports, the Congress stated that some contractors had been hiring professional hackers to manipulate e-procurement servers to get tenders allotted to them. The Contractors Association has also alleged some politicians were behind this manipulation of the e-procurement process. Shylaja S.K., a financial consultant working with the e-procurement cell, had filed a complaint with the CID cyber crime police on August 7, 2019 (FIR number: CID Cyber Crime 0009/2019). But the government and the authorities had failed to file a charge-sheet in this case too, the Congress claimed.

Further, the Congress delegation pointed out that the ACB raids on the BDA offices had revealed many malpractices, irregularities in the land acquisition and allotment of sites. The preliminary report of ACB had estimated a loss of Rs 300 crore to the BDA.

“The ruling party members have also expressed displeasure over the working of the government. Senior minister K.S. Eshwarappa had written a letter to the governor on March 31, 2021, alleging direct interference by the then CM and his aides in the affairs of other departments and called it a clear violation of the Karnataka (Transaction of Business) Rules, 1977, and also against the established practices of the state administration. BJP MLA from Vijayapura Basanagouda Patil Yatnal had accused the then chief minister B.S. Yediyurappa and his sons of indulging in large-scale corruption in tackling COVID-19,” stated the memorandum.

The memorandum claimed that Chief Minister Basavaraj Bommai had openly expressed his inability to control reactions by fringe elements and that the communal violence had increased under the current government.

“It is not democracy but anarchy that has become the system in the state. Rampant corruption, maladministration has caused loss of several thousands of crores to exchequer, which has been swindled by the elected representatives. This is a failure of the constitutional machinery in the state of Karnataka,” the Congress added.