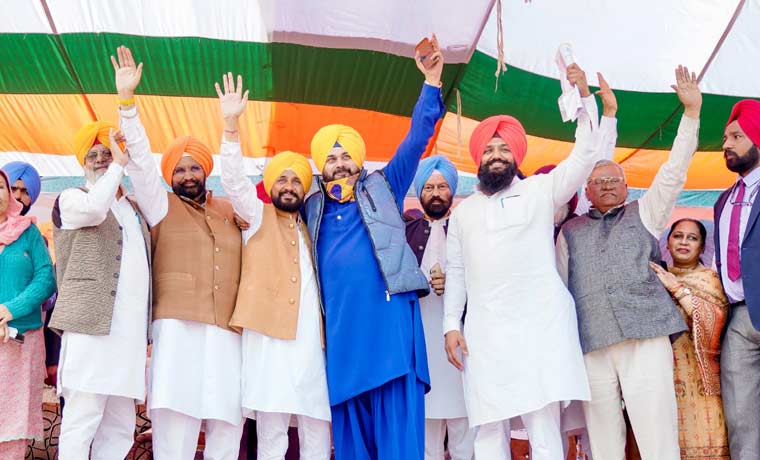 Aam Aadmi Party (AAP) MLA from Punjab's Raikot Jagtar Singh Jagga joined the Congress in Moga on Thursday, in a move that is being seen as a setback to the main opposition party in the state months before the assembly polls.

To AAP's embarrassment, Jagga during the Punjab Assembly session earlier this month had crossed the floor of the House and joined the treasury benches as he called Channi, an "aam aadmi" (common man), fuelling speculation that he may join the Congress.

Earlier this month, another AAP MLA from Punjab, Rupinder Kaur Ruby, had joined the Congress.

Meanwhile, at another event, Channi launched a scathing attack against AAP chief Arvind Kejriwal saying the Delhi CM nurtured a desire to rule Punjab and was therefore trying to mislead Punjabis.

Kejriwal is not even aware of the state's basic topography, he told the gathering at a local grain market here.

Channi also slammed the Badals of the Shiromani Akali Dal saying they had ruthlessly plundered the state.

The Badals are connected to every misdeed against Punjab. They will have to pay for their acts against the state and its people, he said, adding cable, drugs, sand and transport mafia thrived under their misrule.

The Badals will be made accountable for their acts of omission and commission, an official statement released by the government stated.

The Punjab chief minister said every step of his government is aimed at the well being of the common man.

Listing the initiatives taken by his government, he said power bill arrears of consumers worth Rs 1,500 crore were waived, power rates for domestic consumers were reduced by Rs 3 per unit, motor bills in rural areas, running up to Rs 1,200 crore, were waived and sand prices had been reduced.

Channi also announced the setting up of a nursing college and a stadium in Moga's Bagha Purana.

The stadium will be named after martyr Bhagat Singh, he said.