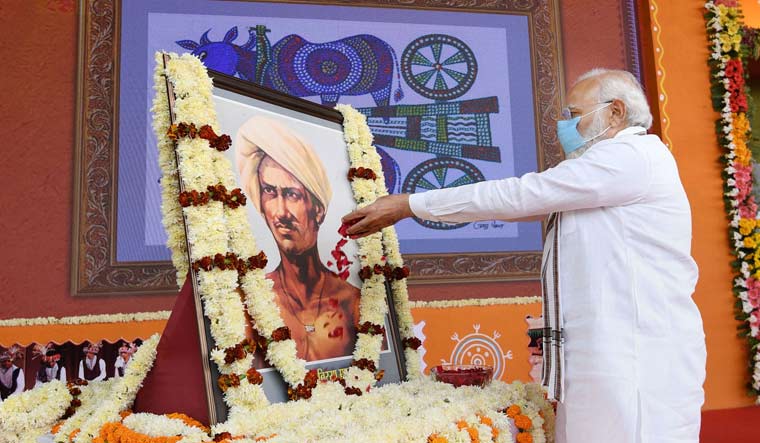 Bhopal: Prime Minister Narendra Modi offering flowers to a portrait of Birsa Munda, during an exhibition on the occasion of Janjatiya Gaurav Diwas on November 15, 2021 | PTI

In what seems to be another attempt at wooing tribal voters, the BJP government in Madhya Pradesh is on a spree of renaming institutions and public places after tribal heroes.

After renaming the Habibganj railway station in Bhopal after tribal ruler Rani Kamlapati on the occasion of the Janjatiya Gaurav Diwas on November 15, Chief Minister Shivraj Singh Chouhan announced that several institutions and places would be renamed after tribal heroes at the concluding ceremony of the weeklong Janjatiya Gaurav Diwas celebrations in Mandla on Monday.

The BJP has been taking various steps to woo crucial tribal voters in the state with an eye on 2023 Assembly polls, given the fact that they are decisive in 84 Assembly seats including the 47 ST-reserved seats. During the 2018 Assembly polls, the BJP won just 34 of these 84 seats and fell short of a majority, while in 2013 it had won 59 of these seats.

The CM announced that the famous Bhanwar Kunwan Square in Indore would be renamed "Tantya Bhil Chouraha", while the still-under-construction MR-10 Inter-State Bus Depot (ISBT) would be named "Tantya Bhil Bus Stand". Tantya Bhil "mama" was a tribal freedom fighter, who was born in Khandwa and died at Patalpani in Mhow in Indore district.

Similarly, he announced the opening of a medical college in Mandla, which he said will be named after Raja Hriday Shah.

Speaking at the programme, the chief minister said that the Congress failed to honour the tribal heroes and neglected ones like Birsa Munda, Tantya Bhil, Raja Shankar Shah and Raghunath Shah. “We will honour their contribution to the country,” he said.

He also added that he will re-establish the pride of Gondwana land, the area ruled by tribal rulers at one time. “Entire world will know what Gondwana was and how incredible are its culture, traditions and life values,” Chouhan added.

The chief minister also announced that a new excise policy is being made to legalize the brewing and sale of traditional Mahua liquor (which is made and consumed by tribal communities).  This liquor will be sold as "heritage liquor" in shops, he said.

Earlier, Chouhan laid the foundation stone of the work of installing the statues of Gond rulers Shankar Shah and Raghunath Shah, who the British executed by cannon on September 18, 1857, after they led revolts during the first freedom struggle.