Yogi Adityanath tweets photos of him taking a walk with Modi, speaks about 'making new India' 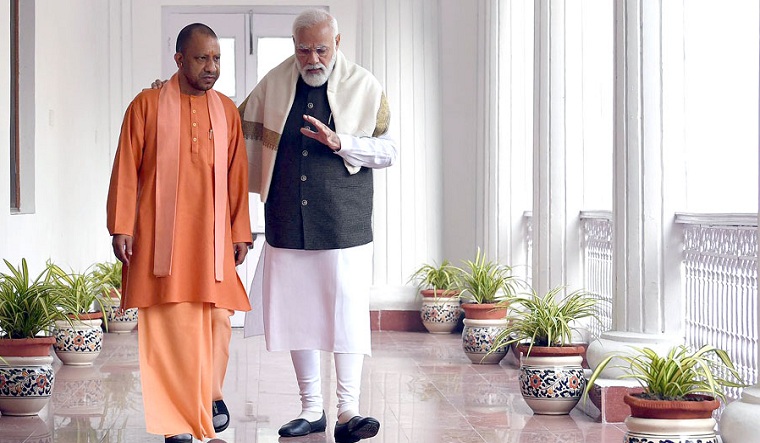 Ahead of the Assembly elections in Uttar Pradesh, two photos of Prime Minister Narendra Modi on a stroll with his hand on Chief Minister Yogi Adityanath's shoulder have created a buzz.

Taking a dig over the pictures shared by the CM on his Twitter handle, Samajwadi Party chief Akhilesh Yadav said sometimes this is done "unwillingly" in politics for the "sake of people".

The Congress too said the photos show that the BJP is "losing" ground and people’s confidence.

Sharing the photos on Twitter, Adityanath had written a poem about the commitment of making a new India.

The photos of Modi with his hand on Adityanth's shoulder in deep conversation were snapped at the Uttar Pradesh Raj Bhavan.

The prime minister, who is in Lucknow to attend the DGPs' conference, is staying at Raj Bhavan since Friday night.

Adityanath had gone to meet the prime minister on Sunday morning.

However, it is not known what discussion took place between them.

Along with the photos, Adityanath wrote a poem in Hindi, which roughly translates to, "We have started a journey with a pledge, dedicating our mind and body, to make the sun rise; rise high above the sky and make a new India".

The Samajwadi Party scoffed at the photos of Chief Minister Adityanath and Prime Minister Modi.

Without a direct reference to Adityanath's tweet, Samajwadi Party chief Akhilesh Yadav wrote a poem in Hindi, "For the sake of people, sometimes it is done in politics; unwillingly one has to put a hand over another's shoulder and take a few steps together."

UP Congress spokesperson Ashok Singh said, "This is a sign of (the BJP) losing ground, losing confidence and scattering of the mandate. And the act was done to save these. This is a concern and it is quite natural to have such a concern."