Will Modi govt’s move to back down on farm laws boost BJP’s prospects in assembly polls?

With the laws out, BJP will be able to focus on messaging of development, hindutva 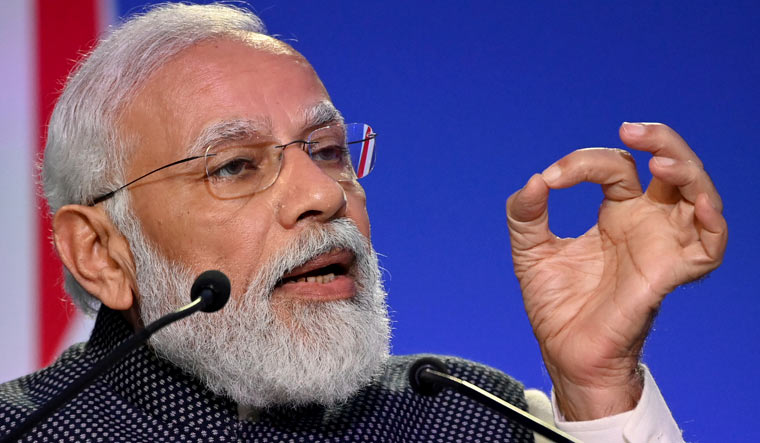 “Let us make a fresh start. Let us move ahead with a new beginning,” Prime Minister Narendra Modi said in an impassioned appeal to agitating farmers, on the birth anniversary of first Sikh Guru Guru Nanak, as he announced the repeal of three contentious farm laws. The PM assured that the process of repeal will be completed in the next session of Parliament, starting later this month.

The Modi government decided to cut its losses, and remove a potent issue from the electoral debate as his party goes to polls in five states early next year. The farmers' issue had found resonance in at least three poll-bound states—Punjab, Uttar Pradesh and Uttarakhand. Before embarking on his tour of electorally crucial UP, the PM, in an early morning address to the nation, made the key announcement regarding the repeal.

During his televised speech, Modi reiterated his government's focus on farmers and the poor. “The government brought these laws for the welfare of farmers, specially small farmers, in the interest of the agriculture sector, for a bright future of ‘gaav-gareeb’ (village poor) with full integrity, clear conscience and dedication towards farmers.”

“Such a sacred thing, absolutely pure, a matter of farmers' interest, we could not explain to some farmers despite our best efforts. Agricultural economists, scientists, progressive farmers also tried their best to make them understand the importance of agricultural laws” he said.

Modi said maybe there was some shortcoming in his tapasya (penance, hard work) that the government could not explain the benefits of these laws to farmers. He assured that he will rededicate himself to working for the welfare of farmers.

The prime minister's announcement comes two days after the government reopened the Kartarpur Corridor for Sikh pilgrims to visit Gurdwara Darbar Sahib in Pakistan. The government had given an indication of its intention to repeal the three laws as there was no mention of these laws in the political resolution adopted after the recent national executive meeting of the BJP.

Senior BJP leaders, including Amit Shah, Rajnath Singh, and J.P. Nadda, were quick to welcome the move saying the prime minister has taken the step in national interest and in the interest of maintaining brotherhood in the country. “What is unique about PM's announcement is that he picked the special day of ‘Guru Purab’ to make this announcement. It also shows there is no other thought except the welfare of each and every Indian for him. He has shown remarkable statesmanship,” Home Minister Amit Shah tweeted.

What has forced the government's hand is not a rethink on the policy, but practical politics as the assembly polls are nearing, and national security as there has been an increased threat from across the border. Former Punjab chief minister Amarinder Singh had hinted that the farms laws should be withdrawn in the national interest as anti-national forces can take advantage of the building sentiment against the government in the border state. The NDA government had earlier called an all-party meeting of Jammu and Kashmir politicians as Taliban started gaining control in Afghanistan.

At the policy front, this was second time that the Modi government decided to withdraw a proposed change. Last time it was in 2015 when fearing opposition, the government withdrew the land acquisition bill. At that time, Congress leader Rahul Gandhi's jibe of “suit boot ki sarkar” had forced the government to adopt a welfarist stance, and go slow on moves seen as benefiting the corporates.  Modi government's second mandate saw it pushing through key ideological agenda of CAA, repeal of Article 370, and finally enactment of three farm laws.

By getting the farm laws out of the way, the BJP will now be able to focus on its messaging of development and hindutva, which were becoming increasingly less appealing in some parts of Uttar Pradesh, especially western UP which accounts for 100 out of the 403 assembly seats in the state. The Lakhimpur Kheri incident further solidified sentiment against the UP government. Winning UP and Uttarakhand elections is crucial for BJP, as Amit Shah had remarked that road to 2024 will go through ‘UP 2022’. Some opinion polls had also suggested that Akhilesh Yadav was gaining at the expense of the BJP.

Jats who are a dominant community in the western UP had supported the BJP in the past, but their support was not assured anymore for the saffron party due to the agitation by farmers. Moreover, the Jat-dominated party, RLD, had aligned with Akhilesh Yadav's Samajwadi Party.

The repeal of farm laws would also allow BJP leaders to venture out in Punjab and start campaigning. None of the senior party leaders were able to visit the state owing to protests and boycott by the farmers. The BJP had lost its oldest ally Akali Dal due to the opposition to farm laws. The saffron party is now faced with a new dilemma: whether to align with politically diminished Amarinder Singh, or woo Akali Dal again. If Akali Dal contests along with the BSP, it will be in direct contest with Amarinder-BJP alliance.

While it is a tactical victory for the farmers, it also sends out an important lesson on mass civil society movements in the country. If the agitations are kept non-violent and sustained for long, they can move governments, especially if they have the potential to politically harm the ruling dispensation.

Will this be the anti-corruption movement redux, as the previous agitation did to the UPA government? Will the farmer leaders also jump in the political fray once they return home? Though none of the farmer leaders had contested elections in the past, they had given their tacit support to different parties in the past. This time, with their enhanced political stature, leaders like B.S. Rajewal, G.S. Charuni, and Rakesh Tikiat among others might be sought after by the political parties. Their role will be crucial in the assembly polls.

Meanwhile, most of the farmer leaders welcomed Modi's announcement saying agitation will continue till laws are repealed in Parliament.

“We welcome it. We will only withdraw our protest when it is repealed. Our demand over MSP guarantee still remains, and we will continue to seek its enforcement through various tactics,” said Jagmohan Singh, general secretary of BKU (Dakaunda).

Tikait said, “First you get them repealed in Parliament. First give us guarantee on MSP. People need not get excited yet, and distribute sweets. We will meet again to decide on next course of action.”

The farmer unions are expected to return to their villages when Parliament finally repeals the laws, on a triumphant note. Jury is still out if the tactical retreat by BJP government will help it electorally, or if the Opposition parties have found Modi government's Achilles heel.