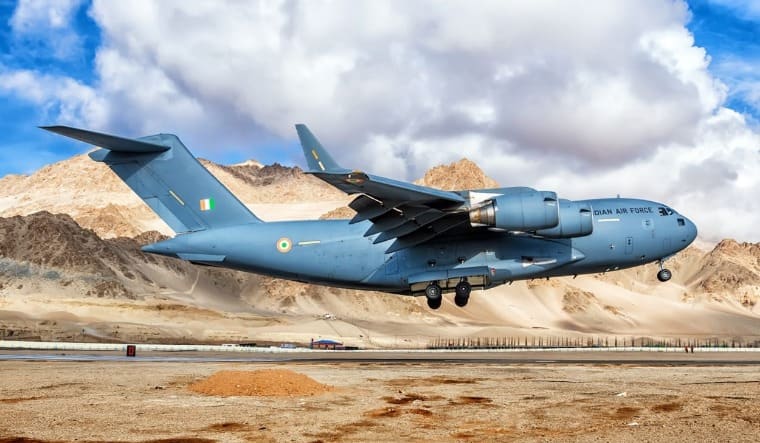 A C-17 'Globemaster' aircraft of the Indian Air Force takes off from Leh | Twitter: @IAF_MCC

Amid tension on the border with China, the Indian military has strengthened the logistics supply in the northern sector and augmented winter stocking in the operational areas on the Line of Actual Control.

Multiple rounds of military and diplomatic negotiations have failed to bring down the high-voltage tension on the Indo-China border.

Though the Indian establishment is keen to resolve the ongoing military standoff through dialogue or negotiation, it is left with no option but to keep large-scale deployment of man and machine on the Himalayan frontiers to counter any 'misadventure' by the Chinese forces.

It will be the second consecutive winter of massive military deployment of tens of thousands of troops on the icy heights.

In light of this, a joint airlift exercise, ‘Op Hercules’, was undertaken by the Indian Air Force and Indian Army on Monday. The platforms utilised for the airlift were C-17, IL-76 and An-32 aircraft, which took off from one of the forward bases of the Western Air Command.

"The effort was a real-time demonstration of the inherent heavy-lift capability of the Indian Air Force, which has played a major role in ensuring the ability to quickly respond to any contingency in the past," said an official from the defence ministry.

Indian Army's Leh-based XIV Corps carries out the world’s largest winter stocking exercise annually as no other army deploys as many soldiers at such heights—which include Siachen glaciers. And due to the “trust deficit” with China over the 18 month-long military standoff on eastern Ladakh and the Galwan clash last year, more than 60,000 troops have been deployed close to LAC.

The XIV Corps, also known as Fire and Fury Corps, will soon be headed by Lt Gen Anindya Sengupta. Lt Gen Sengupta will be the new commander of the corps protecting the sensitive borders and is expected to take charge by the end of this month. He will succeed Lt Gen P.G.K. Menon, who would be leaving after a year-long stint, in which he represented the Indian side in repeated discussions with China to end the conflict in eastern Ladakh.

The Army spends an estimated 15 lakh a year to keep a soldier on heights ranging from 15,000ft to 18,000ft. The cost excludes weapons and ammunition, information on which is classified.

A few days ago, the Indian Army carried out airborne drills in eastern Ladakh to validate and demonstrate its rapid response capabilities in high altitudes. Official sources claim that the exercise includes inter-theatre movement of troops and equipment, precision stand-off drops, rapid grouping and the ability to capture designated targets with speed and surprise.

A report prepared by the United States department of defence has claimed that the stand-off between India and China at the LAC since May 2020 gave the People’s Liberation Army (PLA) “valuable real-world operational and tactical experience”.