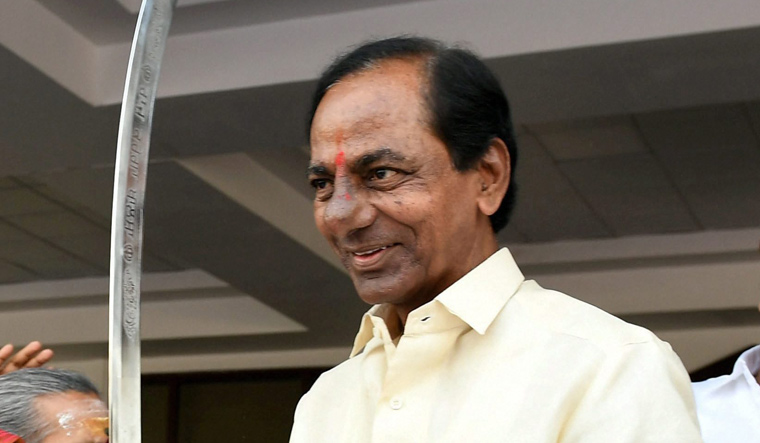 Telangana Chief Minister K. Chandrashekhar Rao has threatened BJP leaders that he would cut their tongues if they don’t refrain from using bad language to criticise him.

Hitting out at Telangana BJP president Bandi Sanjay, Rao on Sunday in a press conference said the saffron party leader is resorting to cheap talk and looking for political gain out of farmers.

The chief minister alleged that it was the Centre which refused to buy paddy from farmers though the state is setting up centres to buy the commodity from peasants.

"TRS is the largest party with the highest number of representatives in the state. So far we have tolerated your comments as dog barking. Henceforth if you indulge in loose talk, utter nonsensical words we will take legal action against you and question you on roads. If you continue to talk nonsense we will slice your tongues, be careful," Rao warned.

The ruling TRS and opposition BJP are indulging in a war of words on paddy procurement making allegations against each other.

Daring the BJP leader to get an order from the Centre on procuring paddy from Telangana, the chief minister said his party is extending issue-based cooperation to the centre.

"The same BJP leader resorted to cheap talk against me. He even said they have a strategy to send KCR to prison. He publicly made such comments.  Can you send me to prison?...Can you even touch KCR? You touch me and see...," Rao said.

Rao further alleged that the BJP will try to rake up communal sentiments or international border issues at every opportunity.

Reacting to the CM's comments, Bandi Sanjay on Monday in a press conference said there are letters from the Centre that it would procure paddy from farmers.

The BJP leader also alleged that the chief minister blatantly lied that the state government has never increased VAT on petrol and diesel in the past seven years though it issued orders enhancing the tax in 2015.

Narrating the various central funds to the state, Sanjay demanded to know what Rao did for farmers.

He further claimed it was Telangana which opposed bringing of petroleum products under GST purview.