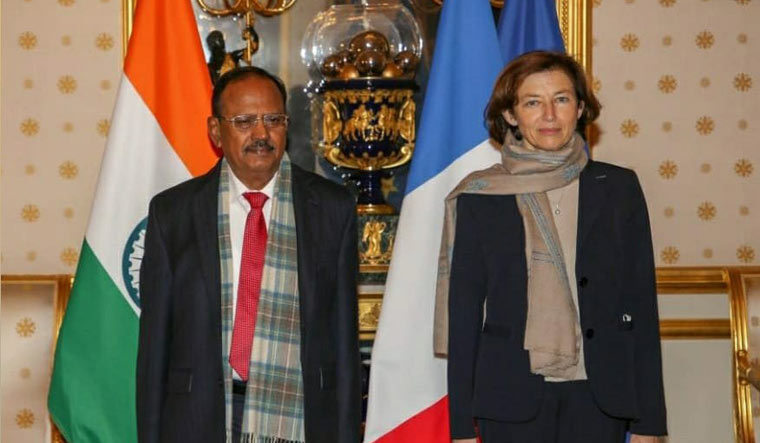 The two countries resolved to expand the defence ties at a meeting of India-France strategic dialogue in Paris on Friday that was co-chaired by NSA Ajit Doval and Emmanuel Bonne, the Diplomatic Advisor to French President Emmanuel Macron.

France's resolve to expand strategic cooperation with India came nearly two months after the unveiling of a new security alliance (AUKUS) by Australia, the UK and the US that had infuriated the French government.

The Indian delegation at the dialogue was led by Doval while the French side was headed by Bonne.

It said the two sides discussed the global security environment, including current developments and long term challenges in the Indo-Pacific, the situation in Afghanistan, Africa, Southeast Asia and West Asia, the continuing challenge of terrorism and emerging threats in maritime, cyber and space domains.

The embassy said it was agreed that the emerging trends in global affairs reinforce the need for closer partnership between India and France, including in the UN Security Council and other UN forums.

It said the two sides will pursue these objectives through enhanced bilateral cooperation, deepening engagement in regional institutions and forums and jointly working with and assisting other countries in the Indo Pacific region.

"France reiterated its commitment to fully support Prime Minister Narendra Modi's vision of Atmanirbhar Bharat and defence industrialisation, joint research and technology development in India across a wide range of advanced capabilities, based on long-standing cooperation and mutual trust," it said.

In the Strategic Dialogue and other meetings, France stressed its continuing commitment to the Indo-Pacific region as a "resident power", and partnership with India as a "major pillar" of its strategy for the region.

"Doval reiterated that France is one of India's premier global and Indo-Pacific partners," the embassy said.

It said the two sides reaffirmed the vision articulated by Modi and Macron, most recently during their meeting on the margins of the G20 Summit in Rome, that their strategic partnership has a vital role to play in advancing peace, stability and security in the Indo-Pacific region based on democratic values and a common belief in strategic autonomy and rule of law.

"India welcomed EU's Indo Pacific strategy and looked forward to French presidency of the European Union in the first half of 2022 as an opportunity to give further shape to EU's engagement in the Indo Pacific region, including in security, connectivity, sustainability and economic development," the embassy said.

Building on the successful India-France initiative on International Solar Alliance, the two sides stressed the need to accelerate cooperation in clean energy, including civil nuclear energy and green hydrogen, it said.

The assertion by France to deepen cooperation with India in the Indo-Pacific came nearly two months after the AUKUS deal.

Under the deal, Australia will get technology from the US and UK to build nuclear-powered submarines.

The alliance is seen as an effort to counter China's growing assertiveness in the South China Sea.

France reacted angrily to the formation of the new alliance as it resulted in Paris effectively losing a multi-billion dollar deal to build 12 conventional submarines for Australia. France was also upset over its exclusion from the alliance.