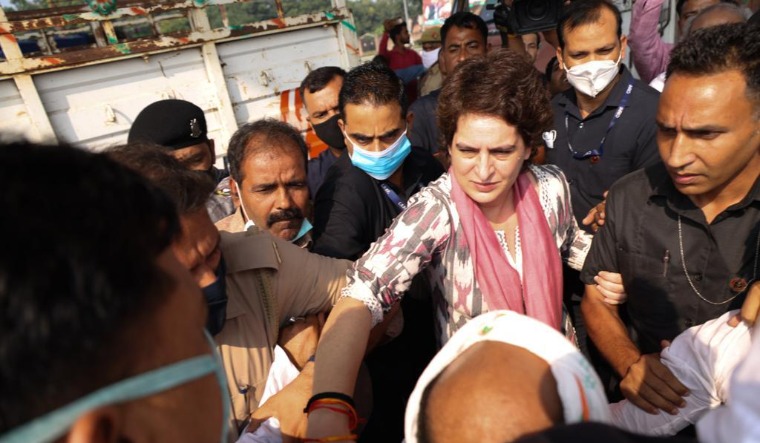 Priyanka had left from Lucknow to travel to Agra to meet the family of Arun Valmiki, who died in police custody after his health deteriorated during interrogation.

In the video footage, Priyanka could be heard asking whether she needed permission to visit Agra. Ajay Kumar Lallu, the state Congress chief, was seen being restrained by police personnel. The Congress shared images of a posse of policemen standing in front of the vehicle in which Priyanka was travelling.

After being stopped, Priyanka Gandhi tweeted, "Arun Valmiki died in police custody. His family is seeking justice. I want to visit family. What is the UP government afraid of? Why am I being stopped? Today is Lord Valmiki Jayanti, PM spoke big on Mahatma Buddha… but is attacking his messages."

The Agra Police said Arun Valmiki was accused of stealing Rs 25 lakh from the Jagdishpura police station last week. The police said he suddenly fell sick on Tuesday night while a raid was being carried out at his house to recover the stolen money.

He was taken to a hospital, where doctors declared him dead.

Arun was arrested for allegedly stealing the money on Saturday night from the police station’s maalkhaana (a storage house where items confiscated by police are kept), where he worked as a cleaner.

People from the Valmiki community gathered at Arun’s house and demanded a fair probe into his death.

Two weeks back, Priyanka was detained by the Uttar Pradesh Police while she attempted to travel to Lakhimpur Kheri to visit the kin of the victims of the October 3 violence. Priyanka and her brother, Rahul Gandhi, were granted permission to visit the families of the victims after she spent two days in police detention.