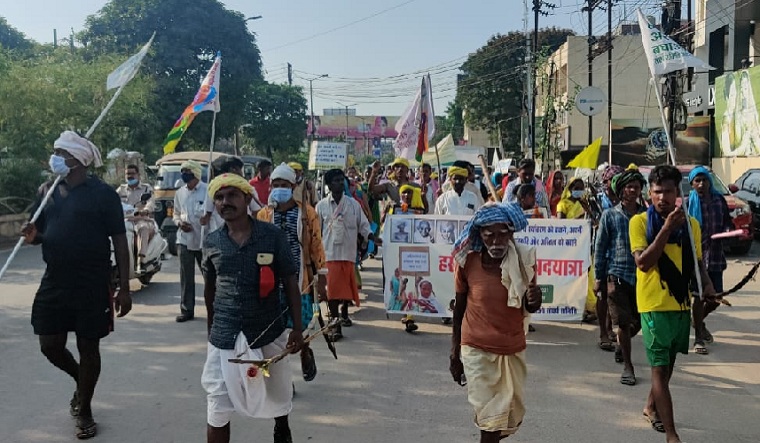 The 350-odd tribal and forest dwellers from Korba and Sarguja districts had started their foot march on October 4 from Fatehpur village.

The villagers on a 300km foot march to protest coal mining in the deep forests of Hasdeo Arand in north Chhattisgarh reached the capital city of Raipur on Wednesday and are expected to meet Governor Anusuiya Uikey and Chief Minister Bhupesh Baghel on Thursday.

The 350-odd tribal and forest dwellers from Korba and Sarguja districts had started their foot march on October 4 from Fatehpur village in Sarguja with a slew of demands including cancellation of all mining projects in the region.

Their protest came into international spotlight on Wednesday as climate activist Greta Thunberg retweeted a tweet on the issue by a handle ‘Tribal Army’. The tweet included a video of the foot march by the villagers with the caption: “Stop Adani from destroying Chhattisgarh Hasdeo wild life, forests & polluting its rivers.”

The villagers have been protesting the ongoing and proposed coal mining projects in the region, which are threatening the forest ecosystems and the people dependent on them for their livelihood. Despite protests, six coal blocks have been allocated for mining and two of these blocks—Parsa East and Kete Basan (PEKB) block and Chotia I and II block—are already operational.

Another block – Parsa - has received forest and environment clearance. The forest clearance was allegedly on the basis of forged ‘gram sabha’ consent, the Hasdeo Aranya Bachao Sangharsh Samiti, the joint platform of protesting tribals, has said.

Also, land acquisition, without consent of ‘gram sabhas’, has commenced in Parsa and three other blocks—Kete Extension, Madanpur South and Gidhmudi Paturiya, the committee said.

Alok Shukla of Chhattisgarh Bachao Andolan, who has been associated with the campaign for a decade, said that the governor has already given time to a delegation of villagers on Thursday and time has been sought from the chief minister, too. “The villagers are prepared to stay on in the capital till there is a suitable decision on the issue. A call for further action will be taken depending on the meeting with the governor and the CM (if it happens) on Thursday,” Shukla said.

Meanwhile, earlier in the day, the chief minister told media persons that he had come to know about the protest from the media but did not get any offer of talks yet. “But we are open to talks as issues could be resolved only through talks,” he said.

Meanwhile, another huge group of tribal residents of 22 villages under Bastar Nagar Panchayat reached Raipur after a 270 km long foot march on Wednesday, pressing a unique demand for reversal of their status from Nagar Panchayat to individual gram panchayats. They laid a siege to the Raj Bhavan on Wednesday, before a delegation was allowed to meet the governor.

Corporator of Bastar Nagar Panchayat, Ramchandra Baghel, one of those leading the foot march, said that the 22 villages were merged with Bastar town in 2008 to form the Nagar panchayat, but the remote villages did not get any urban amenities like roads, drainage, or drinking water. Rather they lost rights to MNREGA work due to their urban status. They are therefore demanding the reversal of their status to village panchayats.