20 years of Modi in power: PM left his stamp on everything he handled 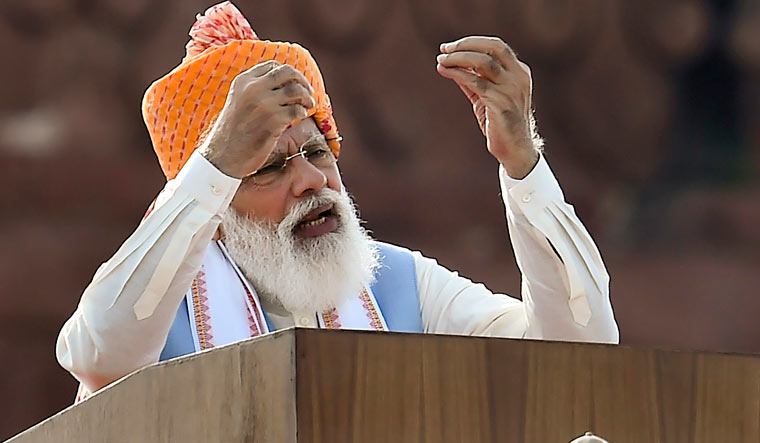 From handling the destruction caused by Bhuj earthquake in 2001 to leading the management of COVID-19 pandemic 20 years later, Narendra Modi has come a long way. He has left his stamp on everything he handled, policies he brought out first as a chief minister, and now as the prime minister. Modi turned 70 on September 17 and he also completed 20 years in office on October 7 since he became Gujarat CM for the first time in 2001.

Modi was the first prime minister of the country, who was born in the Independent India. In fact, his style of governance and politics is aimed at making a break from the past, particularly that of the Congress. As New Delhi's Lutyens zone undergoes a revamp, Modi's stamp will forever be etched in the country's landscape as new buildings, including the Parliament house, government offices, PM and vice president residences are being built.

“From being the four-term chief minister of Gujarat to heading the world’s largest democracy as its Pradhan Sewak, the 20-year-long journey of public service of Modi has been devoted towards making India a prosperous and strong nation—a Vishwaguru. A karmyogi par excellence, Modi has given our nation the confidence of fulfilling our dream of a New India,” BJP chief J.P. Nadda said.

While the impact of central government policies take time to make a dramatic change, what has changed in the last seven years is how Modi has transformed BJP in the country that it is the main ideological pivot. The stunning makeover of the BJP into an aggressive political force which complements the government in its initiatives is what make Modi era different from the Vajpayee regime when the organisation lacked strength. Modi through his trusted lieutenant Amit Shah kept the focus on building the organisation as they turned the party into a mass cadre-based with ideological training, matching events to keep them aligned.

BJP's formidable outreach keeps it ahead of the competition. Other political parties have much catching up to do in terms of chalking programme, holding public outreach, propounding a singular narrative to counter the saffron party. While the BJP has succeeded at the national level when the contest is between Modi and then rest for the PM's post, the party had limited success when it was up against the regional satraps like Mamata Banerjee and Navin Pattnaik.

Modi as a keen observer of politics is also its consummate player. He has kept his messaging appealing to the corporate India and the poor alike. If privatisation and disinvestment are aimed at breaking from country's socialist past, he has brought welfarist schemes for the poor and marginalised—Jan Dhan Yojna, Jan Suraksha Yojna, Mudra Yojna, Ujjalwala Yojna, Ujala Yojna, Ayushman Bharat Yojna, Kisan Samma Nidhi Yojna, Awas Yojna, Soubhagya Yojna, Atmanirbhar Bharat.

Modi's tenure is marked by the following up on the party's ideological agenda. Scrapping of Article 370, criminalising triple talaq, building grand temple at Ram Janmbhoomi, Citizenship Amendment Act, giving constitutional status to the OBC Commission, and 10 per cent reservation to poor belonging to the general category, have kept Modi at centre of the debate. His deification has made him occupy the mindspace of the country, more than anyone else.

Modi has tenure till 2024 and is yet to face a formidable opponent. The road to 2024 will be clear in 2022 when elections in five key states, including Uttar Pradesh, will be held. Modi's challenge lies in creating jobs and turning out the economy so that benefits percolate below. A lot will depend on how the opposition parties are able to rally together to counter Modi, and offer a viable alternative in form of a narrative, and a face.