1,168 oxygen plants developed by DRDO to be dedicated on Thursday 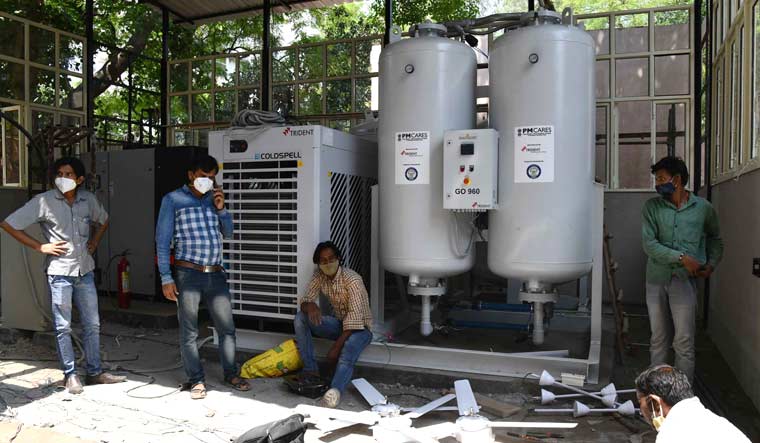 Final touches being made to the DRDO's oxygen plant at RML hospital, Delhi | Sanjay Ahlawat

When the second wave of COVID-19 caused distress across the country, primarily due to the shortage of medical oxygen, the Centre turned to the country's premier defence scientists. The DRDO was tasked to set up 1,200 oxygen plants on war footing. The defence research organisation pooled in all its resources, at times pulling out scientists involved in missile development, to focus on completing the task at hand.

On October 7 (Thursday), 1,168 oxygen plants, developed by DRDO, will be dedicated across the country. While 43 of these will be dedicated by PM Modi, the remaining will be done by public representatives and local administration.

The PM will visit poll-bound Uttarakhand on Thursday where he will inaugurate an oxygen plant at the All India Institute of Medical Sciences (AIIMS) in Rishikesh. Uttarakhand will go to polls next year.

Apart from the oxygen plant at AIIMS Rishikesh, PM Modi, who completes 20 years of service in a constitutional post ever since he took oath as Gujarat chief minister in the year 2001, will virtually dedicate 42 other plants across the country. Except for Mizoram and Andaman and Nicobar islands, medical oxygen plants are ready for all states and Union territories.

The shortage of oxygen during the second wave of the pandemic had led to several deaths.

In a first of its kind task, DRDO used onboard oxygen generation technology for light combat aircraft (LCA) Tejas for the medical oxygen plants (MOP). All these plants can generate 1,000 litres of oxygen per minute.

The DRDO transferred its MOP technology to Bengaluru-based Tata Advanced Systems Limited and Coimbatore-based Trident Pneumatics along with other private industries to set up plants across the nation.

"The prime minister's office expressed confidence in DRDO's capability and the organisation has delivered it on time," said a key official, who added that every laboratory of DRDO was directed to provide all possible support for setting up medical oxygen plants.

Till now, a total of 1,224 medical oxygen plants have been funded under PM CARES across the country, out of which more than 1,100 plants have been commissioned, providing an output of over 1,750 MT oxygen per day.

During the first wave of COVID-19 in 2020, DRDO had come out with multiple inventions, including sanitizers, masks and PPE kits. It fast-tracked the design and development of N95, N99 mask and many other technologies for disinfection and protection from COVID-19. These technologies were transferred to many industries for free for all COVID related technologies.