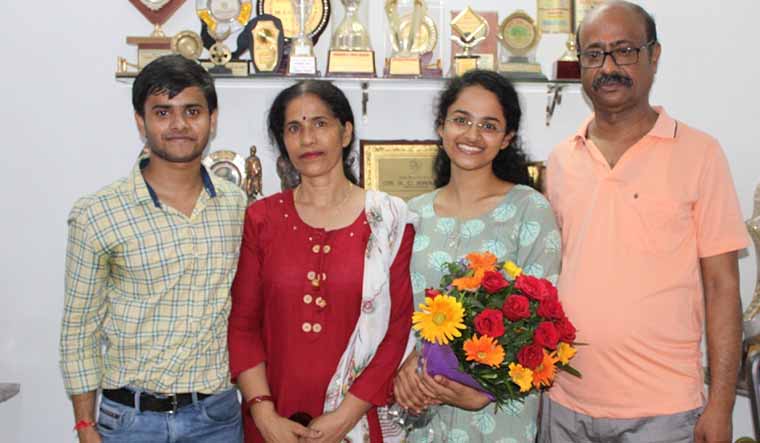 Jagrati Awasthi with her family

“I want to become a competent officer, an accountable person and work for rural development with special focus on women and children.” Bhopal-based electrical engineer Jagrati Awasthi, who bagged the overall second position in the Union Public Service Commission (UPSC) civil services examination 2020, is clear on what she wants to do.

Awasthi, 24, is the topper among women candidates who cleared the exam. In 2018, Srishti Jayant Deshmukh of Bhopal had topped among female candidates in UPSC civil services examination, but had bagged overall fifth rank in the country.

The results of the civil services exam were announced earlier on Friday evening. Bihar resident Shubham Kumar, a BTech (civil engineering) graduate from the IIT Bombay, topped the elite examination.

A total of 761 candidates - 545 men and 216 women - cleared the examination, which is conducted annually by the UPSC in three stages - preliminary, main and interview - to select officers of the Indian Administrative Service (IAS), Indian Foreign Service (IFS) and Indian Police Service (IPS), among others. The UPSC said that the top 25 candidates comprise 13 men and 12 women.

Jagrati, the elder daughter of homoeopathy doctor S.C. Awasthi and former teacher Madhulata, cracked the exam in the second attempt and had taken sociology as her optional subject, considering her inclination towards social work.

Jagrati told THE WEEK that because of COVID-19 induced lockdown she had to depend on online coaching and basically it was self-study that did the trick for her. “I should say that I depended on hard work and perseverance and was rewarded,” she said, taking few minutes away from the flurry of mediapersons and phone calls that have flooded her since Friday evening.

She did her schooling from Maharishi Vidya Mandir and her engineering from the Maulana Azad National Institute of Technology.

“In 2016, Jagrati promised to me that if I would leave my job and support her full time, she would surely get a rank in GATE (Graduate Aptitude Test in Engineering). I asked her to give that to me in writing; she signed the note and got 51st rank. Giving up the offers for IOCL and ONGC, for which she got first options, she joined BHEL in Bhopal as technical officer to be with her brother Suyash who was then preparing for NEET (medical entrance test),” Jagrati’s proud mother Madhulata told THE WEEK. Suyash is now pursuing MBBS (second year) in Gandhi Medical College, Bhopal.

Jagrati gave up her BHEL job in 2019 after two years in service, to prepare full time for civil services exam.

Chief Minister Shivraj Singh Chouhan and MP Congress chief and ex-CM Kamal Nath were among those who tweeted to congratulate Jagrati on her achievement.

Meanwhile, in other parts of the state, Ahinsa Jain of Jabalpur bagged the 53rd rank and Abhishek Khandelwal of Hoshangabad bagged 167th rank in the civil services exam.

Jagrati has given preference for IAS and Madhya Pradesh cadre and is likely to get them both. "I have no issues working anywhere in the country though," she added.