Eight women from Vidarbha to visit 8 major rivers during the 11,000km tour in 25 days 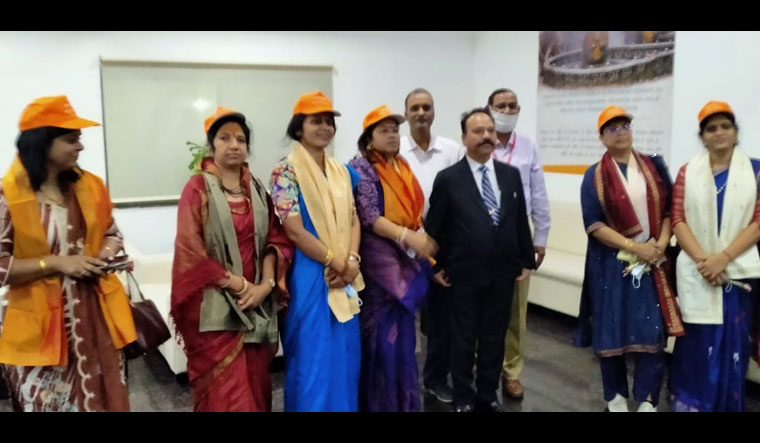 Eight women from Vidarbha region in Maharashtra have set upon a 25-day pan- India tour under the ‘Dekho Apna Desh’ (see your country) initiative of the Union government and made their first stop in Madhya Pradesh on September 18 and 19 to visit major religious tourism spots of Omkareshwar and Ujjain.

The women participated in the Bhasmarti ritual in Ujjain Mahakaleshwar temple in the wee hours of September 19 and proceeded to Gujarat where they visited the statue of unity in Kevadia.

Called the ‘Tejaswini Jyotirmaya Yatra’, the 25-day tour of the women is expected to cover 11,000km across 13 states of the country and will mainly touch upon eight major rivers and the nine jyotirlingas (devotional representation of Lord Shiva). Omkareshwar in Khandwa and Mahakaleshwar in Ujjain of Madhya Pradesh are the two of the 12 prominent jyotirlingas in the country. They will also visit other important places of tourism, religious and historical importance during their tour.

The tour has been planned as part of the 75th anniversary celebrations of Indian independence with an objective of witnessing the lifestyle, culture and achievements spanning different regions of the country, Shubhangi Medhe, a member of the tour team said.

Medhe further said that one of the main objectives of their tour was to closely study the eight rivers considered lifelines of the country—Narmada, Kshipra, Yamuna, Ganga, Mahanadi, Godawari, Krishna and Kaveri.

The women team members will also create awareness on river conservation and saving rivers from pollution during the tour. They will collect water from each of the river and finally make an offering in Kanyakumari, Medhe said. They will also perform religious rituals at various places for world peace, health and prosperity of entire humanity.

The tour will touch as far as Dwarka (Gujarat) in west, Amritsar (Punjab) in north, Puri (Odisha) in East and Kanyakumari (Tamil Nadu) in South. The 25-day tour will conclude back in Nagpur on October 12.

The team was welcomed at the Kshipra Residency Hotel in Ujjain on September 18 evening by a team of MP Toursim Development Corporation. Indore regional manager of MPTDC N.K. Swarnakar and manager Subhash Agrawal were present on the occasion.