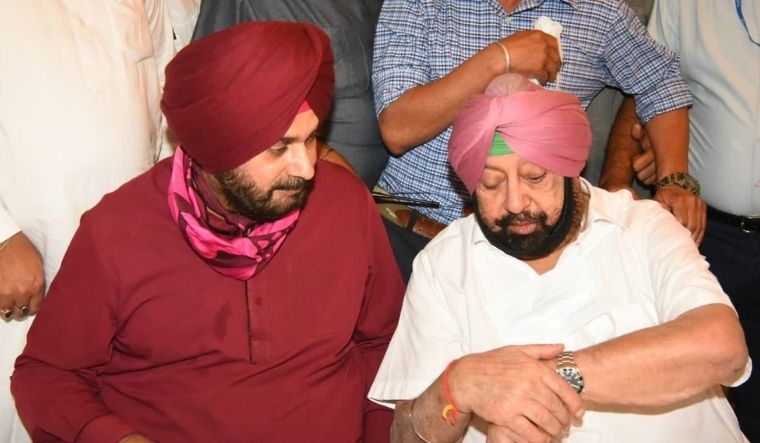 It had been long expected that the tussle between former Punjab chief minister Amarinder Singh and state Congress chief Navjot Singh Sidhu would get ugly.

Amarinder's resignation on Saturday and his subsequent comments meant the gloves were well and truly off. On Saturday, Amarinder gave interviews to multiple news outlets in which he claimed Sidhu being appointed Punjab chief minister would be a "disaster" as the latter was friends with Pakistan Prime Minister Imran Khan and had hugged the chief of the Pakistan Army.

On Sunday morning, Sidhu's side responded to the ‘Pakistan’ jibes. Mohammad Mustafa, a former DGP of Punjab—who had been appointed the principal strategic adviser to Sidhu in August—accused Amarinder of ties to an ISI agent.

Mustafa alleged Amarinder had no "business to issue patriotism slips" as he had "LIVED IN AND SLEPT WITH A KNOWN ISI AGENT FOR 14 YRS, NOT TO MENTION HER INDISCRETIONS OF GROSS INTERFERENCE IN GOVT WORKING & TONS OF MONEY SIPHONED OFF IN OVERSEAS ACCOUNTS WITH YR FULL CONNIVANCE."

Mustafa declared he had in his possession a "mountain" of Amarinder's wrongdoings with "irrefutable proofs".

While he did not name the 'ISI agent' referred to in his tweets, Mustafa appeared to be referring Aroosa Alam, a Pakistani journalist, whose proximity to Amarinder had made headlines and invited political snipping in the past.

In 2017, Sukhpal Singh Khaira, an AAP MLA who was leader of the opposition, had accused Aroosa Alam of being a "Pakistani spy". Khaira was suspended from AAP in 2018 and joined the Congress this year.

Mustafa and another IPS officer, Siddharth Chattopadhyay, had challenged the Amarinder government's decision in 2019 to appoint Dinkar Gupta as the state DGP, though he was junior to both of them. While the Central Administrative Tribunal (CAT) quashed the appointment, the Punjab and Haryana High Court stayed the CAT order in January 2020. In February that year, the Supreme Court rejected Mustafa's appeal against the High Court stay order.

Mustafa retired in February this year. Mustafa appeared to refer to the issue of him being denied the rank of state DGP in his tweets on Sunday. He accused Amarinder of conniving with "Arora" (apparently former DGP Suresh Arora). Suresh Arora was given a one-year extension in service in September 2018. The move was seen as a setback to Mustafa's chances of becoming state police chief as the Supreme Court guidelines specify that candidates for DGP need to have "two clear years" of service left to be considered for the post.