Two held for threatening to attack JNU on Independence Day

Both the men are residents of Uttam Nagar 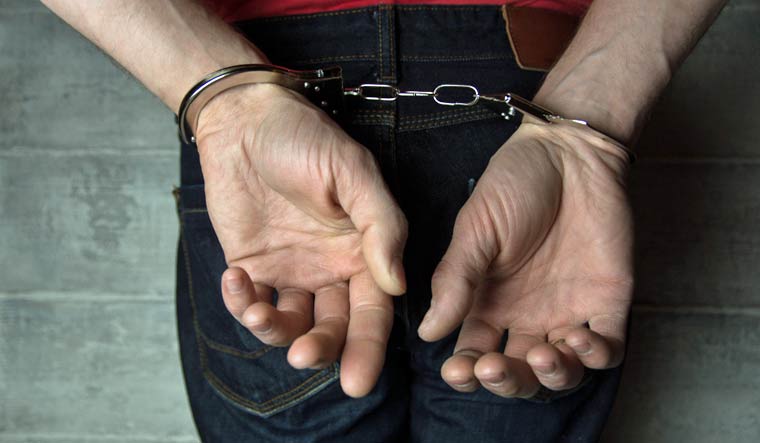 Two men were arrested on Sunday for allegedly threatening to attack Jawaharlal Nehru University on Independence Day, in a video uploaded on Facebook, police said.

The accused have been identified as Vikas Sehrawat (30), who can be heard making the threatening statement in the alleged inflammatory video, and Raja Kumar – both residents of Uttam Nagar, they said.

According to the police, Sehrawat was arrested earlier for allegedly threatening and using foul language for senior Delhi Congress leader and former MLA Alka Lamba in a video.

He told police that he has been associated with Vishva Hindu Parishad (VHP) since 2018.

The police, however, said they are verifying his credentials.

Sehrawat has no association with JNU and made the video to seek attention, they said.

Kumar is the owner of the phone from which the video on JNU was uploaded, they added.

"We received a PCR call from a JNU student on Sunday at 1.51 am at Vasant Kunj (North) police station stating that a video has been uploaded on Facebook page ''Mahakal Youth Brigade'' alleging that the university would be attacked," Deputy Commissioner of Police (southwest) Ingit Pratap Singh said.

After receiving the call, police personnel were deployed in plain clothes at all gates.

A few other calls were also received in this regard, the police said.

"The students came to the police station and filed a complaint. The Jawaharlal Nehru University Students'' Union (JNUSU) office-bearers wrote a similar complaint where they alleged that the video promotes disharmony and enmity, using inflammatory language and also openly issuing threats of physical hurt," the DCP said.

Later in the day, JNU vice-chancellor M Jagadesh Kumar said the campus was safe and there was nothing to fear.

"The campus is safe. We celebrated the 75th Independence Day today (Sunday). People were walking around the campus following COVID-19 protocols. There is absolutely nothing to fear," he told PTI.

Whenever such things happen, security is ramped up, the V-C said. "I myself went around the campus to see the situation and everything is normal," he added.

In its police complaint, the JNUSU said an "open call to gather and march into the Jawaharlal Nehru University campus on the 15th of August, 2021, from 12 pm to 6 pm, to hoist the saffron flag" was given in the videos.

"Additionally, in both videos, there is an open call towards violence for any students that they encounter during the duration of their call along with hate speech towards Muslims," the student''s body said.

On January 5 last year, a mob of masked miscreants had stormed the campus and targeted students in three hostels, unleashing a mayhem with sticks, stones and iron rods, hitting inmates and breaking windows, furniture and personal belongings.

While clamour grew for M Jagadesh Kumar''s removal after the incident, the Delhi Police faced severe criticism for not acting when the mob was running riot on the campus, and especially for naming student union leaders, including JNUSU president Aishe Ghosh, in the two FIRs related to vandalism on the campus.

Earlier this month, Union Minister of State for Home Nityanand Rai informed Lok Sabha that the Delhi Police has not arrested anyone in connection with the violence at JNU even though several people were examined.

On Sunday, JNUSU office-bearers wrote to the security branch of the university to take “immediate action to resist and stop any untoward incident which can disrupt the harmony within the campus and can pose a threat to JNU community”.

"After the January 5 incident, we should be aware of such videos and we need to report to the authorities as soon as possible," Ghosh said.

A case registered against the threat video under sections 153A (promoting enmity between different groups on grounds of religion, race, place of birth etc.), 295A (deliberate and malicious acts, intended to outrage religious feelings), 505 (statements conducing to public mischief) and 506 (punishment for criminal intimidation) of the Indian Penal Code, the police said, adding that an investigation is underway.