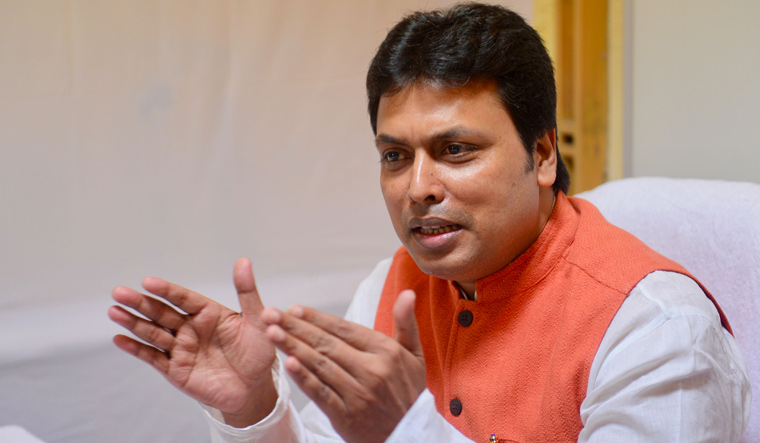 After Assam, Himachal Pradesh and Karnataka, will it be Tripura’s turn next to get a new chief minister? If sources are to be believed, the parliament board of the Bharatiya Janata Party (BJP) is considering changing Tripura Chief Minister Biplab Deb.

The BJP is considering a replacement not because of the resurfacing of Trinamool Congress (TMC) in the state—seven Congress leaders of the state including the former state vice president of Congress and the BJP, Subal Bhowmik, joined the TMC. The move, however, is triggered by the severe criticism against CM Deb from within the state unit of the party and even civil society. Numerous reports of misgovernance and violence in the state have reached the central leadership in Delhi.

The BJP recently made a series of changes in the organisations in Tripura. New state in-charge Vinod Sonkar, a powerful leader and MP from UP, had reached out to the central leadership with his own proposals. BJP’s West Bengal joint general secretary (Organisation), Kishor Barman, who did well in north Bengal, has been transferred to Agartala as state general secretary. The RSS man hails from Agartala. The changes were made when senior BJP leader Sudip Roy Barman (a former Congress leader) lodged serious complaints against Deb for leading the BJP-led state government onto the “brink of disaster”. Last year, Barman travelled to Delhi along with dissident BJP MLAs to meet J.P. Nadda and Amit Shah and lodge a complaint against the chief minister. But they could not meet the leaders as all of them were busy with Bengal election meetings.

Barman, former health minister in Deb cabinet, was axed two years ago for alleged anti-party activities. However, he was not axed from the party. Last month, Barman had contacted Mukul Roy, who recently defected to the TMC from BJP, and reportedly planned to topple the BJP government in Tripura. Though Barman denied it as nothing but atrocious, sources have confirmed a conversation about Tripura between Barman and Roy when the latter was with the BJP. That time Roy had already made up his mind to quit BJP. What added to the fury of central BJP leadership was the last election at autonomous district council (ADC) in Tripura where BJP-IPFT combine suffered a huge blow in the hands of a new party of Pradyot Manikya Deb Barman, who made a clean sweep by winning 18 out of 28 seats. The BJP only got 9 sets. In the last assembly election, BJP-IPFT combined had swept the poll in the ADC areas.

Sensing trouble brewing for the BJP, Mamata Banerjee’s decision to take a plunge into Tripura politics unnerved the BJP as the state is largely inhabited by the Bengali population. Banerjee has sent I-PAC team to understand the ground situation in the state. With the Left making no sign of revival—as it did not get a single seat from ADC areas where they once used to dominate—the I-PAC told Banerjee that Tripura might look for an option for change in the 2023 election and there is a vacuum. The Deb government allegedly detained the I-PAC team and confined them in a hotel. The central BJP leadership did not take the matter lightly. While two BJP delegations has made trips to the state in last three days, and Abhishek Banerjee is all set to make a trip to Tripura next week, Congress’ dissidents are likely to join the TMC in Tripura in the days to come. Interestingly, state Congress president Piyush Kanti Biswas was also one of the persons who moved court against the I-PAC team’s detention in Agartala. With Barman, once an associate of Rahul Gandhi, making an exit followed by Bhowmik and now Biswas, the Congress might face trouble in Tripura. This comes when Mamata met Sonia Gandhi and Rahul in Delhi in her mission to be a leader of third front in 2024.

Deb was summoned to Delhi last week by both Prime Minister Narendra Modi, Shah and Nadda. “Yes, there is a strong anti-incumbency against the Deb government going on in the state. The chief minister could not give a good governance. Forget politicians or I-PAC, many journalists were attacked for last three years,” said Sekhar Dutta, senior political observer of Tripura.

Roy Barman did not respond to THE WEEK’s calls for comment. Chief Minister Deb also could not be reached. Sources said deputy chief minister Jishnu Deb Barman, a member of the erstwhile royal family of Tripura, is a strong contender to replace the CM. Another strong contender is state BJP president Manik Saha himself. And even Sudip Roy Barman is also being considered.