In his farewell speech, Yediyurappa takes a walk down memory lane

"I am not retiring from active politics,” says the veteran BJP leader 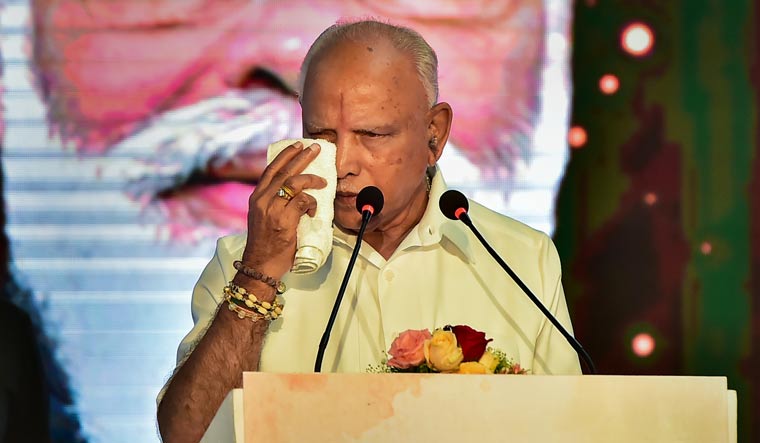 B.S. Yediyurappa speaks during a programme commemorating two years of the BJP government in Karnataka at Vidhana Soudha in Bengaluru | PTI

B.S. Yediyurappa, who stepped down from the post of chief minister on Monday, after weeks of speculations over a leadership change in the state, said he was not an aspirant for any Constitutional post, but would remain active in state politics and strengthen the BJP.

"I am not retiring from active politics. I will tour the state and strengthen the party to bring it to power in 2023 with a clear majority," said Yediyurappa, after he submitted his resignation letter to Governor Thawar Chand Gehlot at Raj Bhavan.

Yediyurappa's decision to remain in state politics instead of accepting the offer of becoming a governor comes as no surprise as the veteran leader has spent decades building the party in Karnataka.

In his farewell speech during the Sadhana Samavesha, an event to mark the completion of two years of the BJP rule in the state, at Vidhana Soudha, Yediyurappa recalled an incident to prove his love for the state.

Reminiscing about his decades-long journey as an RSS pracharak to BJP's one of the most popular leaders in the state, Yediyurappa choked with emotion when he recounted the challenging times, when the BJP was a non-entity in the state.

"Even when senior leaders like Vajpayee, Lal Krishna Advani and Murli Manohar Joshi toured the state, less than 200 people used to attend our rallies. But we did not lose hope. I travelled across the state. We grew from two seats to four and finally the party came to power.  The credit also goes to the people of Shikaripura, who elected me as their MLA seven times. The people of the state stood by us despite the money and muscle power and caste politics played out by our opponents. The people held our hand," said Yediyurappa, who attributed the success to the ordinary party workers.

"Today if the BJP is in power,  it is because of the hard work of lakhs of party workers," he said.

Asserting that his hard work had taken him on the path to success, Yediyurappa recalled his days in the Jan Sangh.

"I was the taluk and zilla panchayat president and I fought for farmers' cause and was involved in pro-dalit movements. Once, I had invited Rajnath Singh ji to a farmers rally with a crowd of 60,000 and he wondered if it was a state level congregation. Late Sushma Swaraj was also witness to such a huge gathering during a women's rally and she was also surprised. I feel I reached here because of my hard work. Those days, in Shikaripura, it was difficult for BJP workers to find a handful of supporters and well wishers.  But we took out padayatras from Basavana Bagewadi, Banavasi, Basava Kalyan and Shimoga to mobilse support and build the party," Yediyurappa said.

Born in Mandya's Bookanakere, Yediyurappa found his calling in Shikaripura in Shimoga. "I started my adult life as an RSS karyakarta and pracharak before I contested and won the Shikaripura Town Municipal Council polls. When I was the TMC president, I was brutally attacked by some people, but by god's grace I survived. That day, I told my wife and children that I will dedicate my life to serving people. I feel I have kept my word.

Once elected to the Karnataka Assembly, Yediyurappa had to face a lone battle. "We had no BJP MLA in the Assembly till Vasant Bangera and I got elected. After Bangera quit, I was left alone in the House and I fought my way through (to emerge as a leader).  I never looked back. I am confident and content that I have discharged my duty and served the people sincerely," says Yediyurappa, adding that he went around on a bicycle in Shimoga to build the party.

'A trial by fire'

Even as the Lingayat strongman reiterated that he had resigned at his "own will" to pave the way for new leadership, Yediyurappa seemed to have had many regrets, too. Interestingly, Yediyurappa chose to recall his first stint as the chief minister, saying the BJP had joined hands with the JD(S) to form the coalition government under "inevitable circumstances".

"Kumaraswamy became the CM and I was his deputy.  But after one year, the father-son duo put up conditions to vacate the CM's post as per the pact. I refused to yield to their demands and resigned as CM. I toured the state to build the party. These are unforgettable memories. In 2008, we came to power by our own strength, but we failed to secure a clear majority due to various reasons. We had to take support from others as we had only 110 seats. We lost an opportunity to bag 115 seats due to our own mistakes," he said.

Stating that his second stint was no better, Yediyurappa called it a "trial by fire".

"I faced agni pariksha at every step. After I took oath as the CM in July 2019, the central leaders did not allow me to expand my cabinet for two months. Then came drought followed by floods. I had to roam around the state like a maniac. Then the cabinet was formed. For the last one-and-a-half years, people suffered due to Covid. The entire machinery was stepped up to tackle the pandemic and we succeeded in our effort. We were also recognised for it by the prime minister. The business had shut down, the tax collection slumped, but we ensured that no development work suffers. It was possible to bring change in the state as development has been our motto," said Yediyurappa, who also had a piece of advice to his colleagues and officers.

"For some reason, people are losing faith in the elected representatives and officers. As our Prime Minister Modi says, we need to work with honesty and sincerity to take the state and the country forward. There are many honest officers. We are trying to make Bengaluru a model city and we need to make every district a model city. For that all of us should work together and with commitment," said Yediyurappa.

The BJP leadership which was keen to ensure a smooth and honourable exit for Yediyurappa seemed to have succeeded in it and Yediyurappa expressed his gratitude to the party for the "special love" it had for him.

"I have resigned on my own to make way for new leadership. Nobody asked me to step down. In fact, I had decided to resign two months back. I feel humbled that Prime Minister Narendra Modi, Home Minister Amit Shah and party president J.P. Nadda reposed faith in me, made an exception to the rule and gave me an opportunity to be the CM even after I had crossed 75 years. It is their special love they have for me," said Yediyurappa.

"I pray to god that Modi and Amit Shah get re-elected as I believe they can take this country forward and make India emerge as a super power" he added.

The veteran leader declared that it was his resolve to bring the BJP to power in 2023 by bagging 120-130 seats and he sought the cooperation of all his partymen.