“I am prepared to resign at any moment,” says Yediyurappa 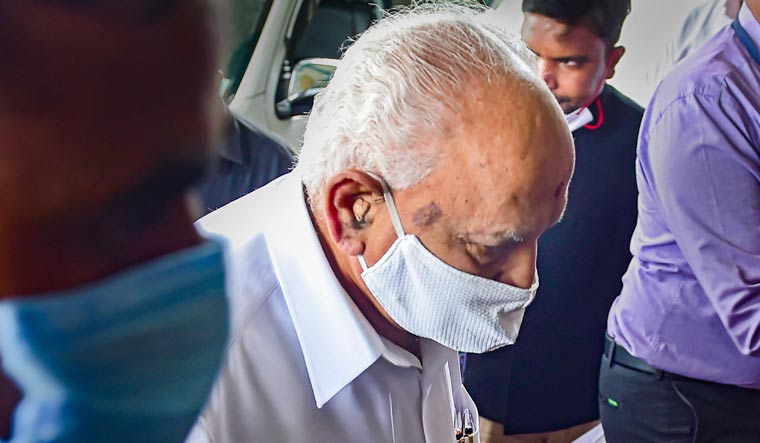 The suspense over B.S. Yediyurappa's replacement continues as the chief minister, who was on a tour of the flood-hit district of Belagavi on Sunday, maintained that he had not got any communication from the party high command.

"I have got no message from the leadership. I am hopeful of getting a clarity on the issue by tonight. I have decided to work till the last minute. Whenever they ask me to step down, I will resign and start working for the party,” Yediyurappa said, adding that he would take part in all the scheduled programmes on Monday.

“I will wait till tomorrow morning for the high command's decision. I will take part in the scheduled programme tomorrow and will take a decision later. I am prepared to resign at any moment," he said.

Earlier in the day, a group of Lingayat pontiffs held a convention in Bengaluru where they expressed solidarity with Yediyurappa and also warned the BJP high command against replacing him.

The chief minister, however, asserted that there was no need for the seers to hold a protest and that he would abide by the party diktat. "I have faith in the party leadership. I am content and at peace today. I am satisfied with the work I have done in the last two years. I urge my followers not to get anxious. I will follow the high command's orders. We all are united in the party and will work together. I will ensure that the BJP comes to power even if 100 Siddaramaiahs (a reference to senior Congress leader Siddaramaiah) come in my path," said Yediyurappa, speaking to reporters at the circuit house in Belagavi.

He further informed that he plans to tour the flood-affected Uttara Kannada district on Monday afternoon, after the "Sadhana Samavesh"—the celebrations to mark the completion of two years of his government.

While the much-awaited phone call from Delhi remained a suspense, BJP national president J.P. Nadda, who is in Goa, told reporters that Yediyurappa was doing "excellent" work as the CM.  "Yediyurappa ji is doing well. Karnataka is being governed well. Yediyurappa is taking care of everything," said Nadda.

Meanwhile, BJP national general secretary C.T. Ravi reiterated that Yediyurappa was a popular leader and a party worker who would abide by the leadership.

"Yediyurappa is undoubtedly a popular leader of our party. The party has given him several opportunities to serve people. He was made the chief minister four times; he has served as the leader of the opposition, deputy chief minister and state president. All these opportunities were given to him by the BJP and not the Congress or the Communist Party. BJP believes in grooming an ordinary party worker into a leader. The party has reached where it is today with the hard work of countless party workers," said Ravi, indicating that Yediyurappa has got his due in the party and the party intends to give an honourable exit to its tallest leader in the state.