According to reports, UAV was shot down around 8km away from International Border 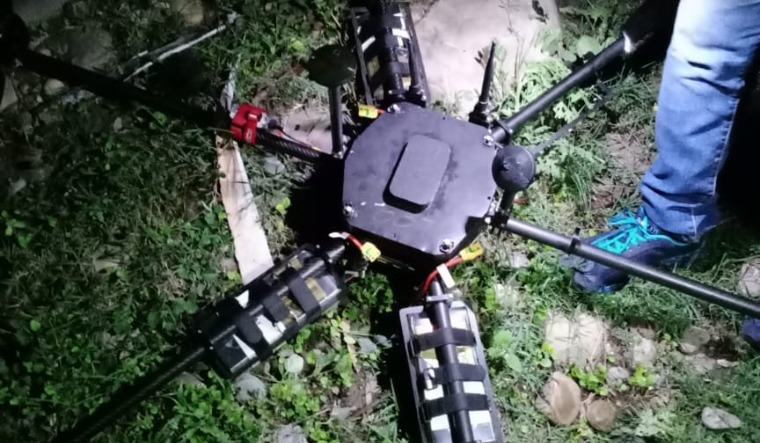 The Jammu and Kashmir Police announced early on Friday that a drone had been shot down over the Kanachak area of Akhnoor sector in Jammu.

The Jammu and Kashmir Police said explosive material was recovered from the downed craft. Images of the drone showed it to be similar to a 'hexacopter', a small rotary-wing design that takes off like a helicopter.

The Jammu and Kashmir Police said the drone was shot down after it entered Indian airspace from Pakistan. Mukesh Singh, IG of Police for Jammu, told THE WEEK a possible attack has been averted.

"The drone was shot down. It was carrying an explosive, but the whole thing was not assembled. The wires had yet to be connected," Singh said. The BSF and Indian Army have increased vigil on the International Border and the LoC to prevent drone intrusions into Jammu and Kashmir. The drones are being used to drop weapons in Jammu and Kashmir, but most attempts have been foiled. The drones are emerging as a new challenge for security forces despite the ceasefire on the borders in Jammu and Kashmir between India and Pakistan since February.

There have been multiple drone sightings in Jammu in the weeks since two drones were used to attack the Indian Air Force base in Jammu in late June, causing minor damage to the installation and injuring two people. The incident, the first drone attack in India, had worried security planners.

(With inputs from Tariq Bhat)