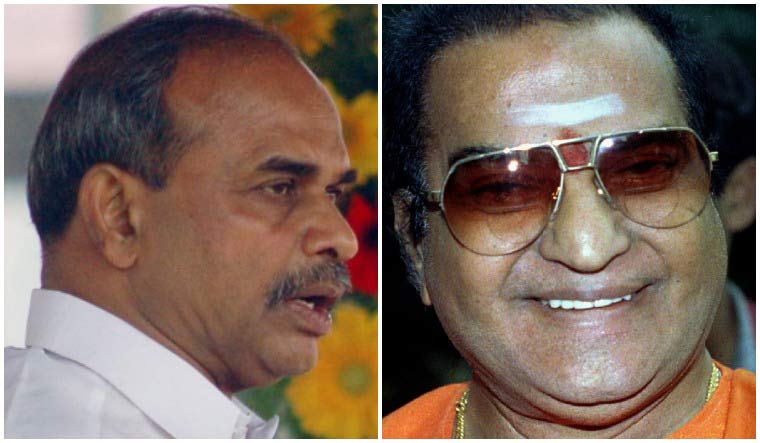 In the late 80s, a ‘bullet gang’ used to emerge from pockets of the old city of Hyderabad. Most of them were of Yemeni descent who had settled in the Deccan region during Nizam rule. They would regularly ride together to public meetings, whether it was held in the city, or in united Andhra Pradesh or even outside the state. What mattered to the group was to show support to their icon—N.T. Rama Rao (NTR). The young men could not converse or understand Telugu and NTR struggled with Hindi and Urdu. But it did not matter as NTR’s charisma penetrated so deeply, that language, regional and religious barriers vanished. A former legislator and a follower of NTR recalled how he tagged along with the gang in his heydays as he also had a Bullet bike.

NTR’s roots are from coastal Andhra region where he was born but he spent most of his life as an actor in Madras (Chennai) where he metamorphosed into a star. However, Telugu Desam Party (TDP) which he founded in 1982, was more connected to the Telangana region.

The party was born in Ramakrishna studios, a property of NTR, in Hyderabad. TDP’s first ever public meeting was held at Nizam college grounds in the heart of the city. NTR used to conduct party activities at ‘Telugu Vijayam’, a sprawling property of NTR at Gandipet, on the outskirts of Hyderabad. In the run-up to his first ever elections in 1983, NTR covered Telangana in the first phase during the historic campaign which placed him in the CMs chair. He was also successful in wooing Backward Castes, which was not seen as a vote bank until then, into his fold in Telangana. NTR had contested from two Telangana constituencies, Nalgonda (1985) and Kalwakurthy (1989).

Last week, TDP experienced a major setback marking its complete downfall in the Telangana region, a far cry from its glorious past. L. Ramana, who was the state president of the party for the last seven years joined the ruling party, TRS. What should be more demoralising for TDP is the fact that Ramana belongs to the backward community, considered to be the backbone of TDP. Currently, TDP does not have any MLA or MP from Telangana. In the last few years, NTR’s political legacy dimmed as TDP became more and more irrelevant. If the transfer of power from NTR to his son-in-law and former CM, N. Chandrababu Naidu and subsequent changes within the party pushed the legendary actor into oblivion, then the present crisis of the party has fastened the fading of his political legacy.

The current headquarters of TDP in a plush locality in Hyderabad came up after NTR died and is identified more with Naidu. However, time and again TDP, under Naidu, invoked NTR during elections but even that is a thing of the past as a high-decibel Telangana demand overshadowed such campaigns. The party’s fortunes in Telangana plummeted during 2014 general elections, the year united AP was bifurcated into two states. The party won 15 seats out of 119, which got depleted to 2 members by the end of the term due to defections. Facing a tag of ‘Andhra party’, the next big blow for the party was the Greater Hyderabad Municipal Corporation (GHMC) elections in 2016. The party won just 1 seat, down from 45 in the previous term. Today, the party does not have a single Corporator in the greater Hyderabad, and no notable political face in the state. NTR, who is visible through various statues present in Hyderabad, may evoke adulation but not votes.

Where one’s political legacy looks bleak, another one has got a much needed boost.

Hours before TDP lost its state head, a new party was launched in Hyderabad. Inside a convention hall in Hyderabad, YS Sharmila unveiled the flag of YSR Telangana Party (YSRTP).

The party flag had the picture of her father, former CM of united AP, Y.S. Rajasekhara Reddy. Speaking to the crowd, Sharmila refreshed the memory of the audience on all the important initiatives introduced by her father during the five years he was in power. She also touched on political events of the past involving her father. Sharmila assured that she will strive to get back YSR’s rule.

A staunch Congressman, YSR was a doctor-turned-politician hailing from Rayalaseema region of present AP. He became a minister before he turned 30 and rose to become a formidable force within the party. YSR was known to be a supporter of a united AP and against the idea of a separate Telangana. Yet, he had amassed a massive following in Telangana

One of his biggest milestones is undertaking a three-month padayatra (walkathon) which catapulted Congress to power in 2004. He started his walkathon from Chevella constituency, close to Hyderabad city and passed through different districts of the state where he received good response. However, the leader earned a lot of goodwill in this region because of the welfare schemes he introduced, including financial support for medical treatment and fees reimbursement for students. After YSR died in a helicopter crash in 2009 while he was still the CM, his supporters claimed that unable to bear the untimely loss, more number of people died due to heart attacks and suicides in Telangana than compared to Andhra or Rayalaseema regions. In the following years, YSR’s legacy was shared by both Congress and YSR Congress Party (YSRCP), launched by his son and present AP CM Y.S. Jagan Mohan Reddy in 2011. As agitation for separate Telangana picked up, Telangana Congress leaders treaded cautiously and avoided glorifying YSR due to the fear of hurting Telangana sentiment. Post bifurcation in 2014, YSRCP almost withdrew from Telangana in a bid to concentrate in AP and emerge as a powerful entity. And in Telangana, YSR’s name cropped up only occasionally during political discussions or through statements by his admirers.

With the latest development, there is now a claimant of YSR’s legacy whose only goal will be to spread his name and work across Telangana. Similar to YSR, Sharmila has also planned a padayatra which may see her on ground for next two years. The future of Sharmila's party is unknown at this point, but what is known is that there will be a strong push to elevate YSR and keep his political legacy alive in Telangana.