A change of guard within the Karnataka BJP appears inevitable 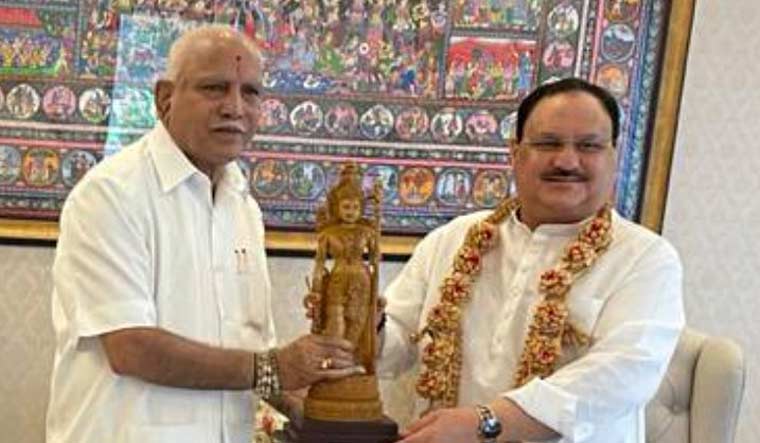 Will Chief Minister B.S. Yediyurappa step down and pave the way for a change of guard in Karnataka?

Even as the chief minister's two-day trip to the national capital has sent a fresh wave of speculations over his replacement,  Yediyurappa has categorically dismissed these rumours, saying there is "no truth" in them.

The suspense continued all through Saturday, too, even as Yediyurappa called on BJP national president J.P. Nadda,  Defence Minister Rajnath Singh and Home Minister Amit Shah, before flying back to Bengaluru in the evening. All through the day, Yediyurappa laughed off the rumours about his resignation.  "If I have indeed resigned, there is no need to keep it a secret. Such a situation has not arisen," he told reporters in Delhi.

Yediyurappa also maintained that his visit to Delhi was to discuss the development of the state and the strengthening of the party in the state.  "I will again visit Delhi in the first week of August," he added.

Back home, Yediyurappa said his Delhi trip had been a "successful" one.

"My Delhi trip was successful. During my meeting with Prime Minister Narendra Modi which went on for nearly half an hour yesterday,  we discussed the political situation in the state and the country.  Today,  I apprised our senior leaders Amit Shah-ji, Rajnath Singh-ji and party president Nadda-ji about the current political situation in the state. They all have expressed a common desire to see the BJP come to power in Karnataka by winning the 2023 Assembly elections with a clear majority. They want to see BJP win the highest number of seats from Karnataka in the 2024 Lok Sabha polls. The central leadership expects me to strengthen the party in the state. I have assured them that in the coming days, we will all collectively work towards strengthening the party," said Yediyurappa.

When asked about the possibility of a change of guard in the state in near future,  Yediyurappa asserted there was "no confusion" over the leadership in the state at present.

"The high command has clearly indicated that I should continue as the CM. However, it is my bound duty to follow the party diktat at all times. There is no question of change of guard as of now," said Yediyurappa.

Interestingly, Yediyurappa reiterated that he would abide by the party diktat and step down if and when the party leadership asked him to—a major departure from his earlier stand of remaining the CM for the full term.

"BJP has no dearth of leadership. But currently,  I have been given the responsibility to lead and I hope to make an honest effort to unite and strengthen the party," said Yediyurappa, who also sent a strong signal to his detractors.

Asked about the voices of dissent and the disgruntled leaders complaining against him to the party leadership, Yediyurappa said, "A few leaders might have issues but I have not bothered to break my head over it. The central leadership has not asked me anything about the disgruntlement against me. It is up to those people to reform themselves. On July 26, I complete two years in office. So, I have convened the BJP legislature party meeting on that day hoping to unite the party and to deliberate on strengthening the party."

The celebrations to mark the completion of two years of the BJP government might not quell either the rumours or dissent. The disgruntled BJP leaders and Yediyurappa baiters will continue to frequent Delhi, equipped with a lengthy "charge-sheet" against the chief minister—from alleged corruption in the government, gross interference by the chief minister's son in the government affairs, old age and poor health of the CM, poor governance, paucity of funds for development work to poor COVID management during the second wave.

Meanwhile, the party leadership has certainly begun the process of finding an alternative leadership in the state, as the Lingayat strongman will be 80 when the state goes to the polls in 2023.

A change of guard in the state now seems inevitable, especially after Yediyurappa's marathon meetings in Delhi and his efforts to stress on "collective leadership". The ball, it seems, is finally in the party high command's court. But, the saffron party that is hoping to leverage Yediyurappa's mass appeal and his stranglehold on the numerically and politically significant Lingayat community to win not just the Assembly elections but also the Parliament elections, is in no mood to retire the old warhorse any time soon.