Five seafarers, who were arrested in Iran in Feb 2020, were released after 403 days 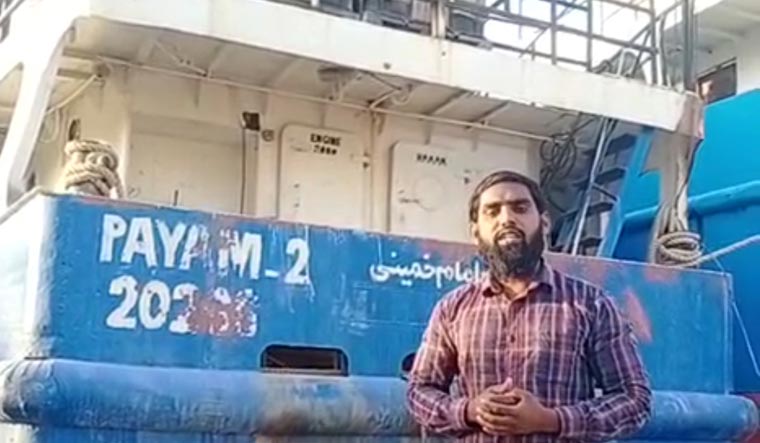 Two days after five Indian nationals who were stranded in Iran's Chabahar port sought the Indian government's help, another stranded man has appealed for assistance. Yaseen Shah, a native of Karwar district of Karnataka, has written to Prime Minister Narendra Modi and raised serious national security concerns over the exploitation of stranded Indians in Iran.

31-year-old Yaseen, a seafarer who claimed to be cheated of approximately Rs 7 lakh by the recruitment and placement services agents, has been languishing in Iran for 600 days without any source of income. In his letter to the prime minister, he has claimed that he has been abandoned on the inoperative vessel 'Payam 2' at Khorramshahr Port by his employers since January 12, 2020.

Yaseen has alleged that on his arrival in Iran, his employers, including the local agents, forced him to sign malafide one-sided contracts and undertakings in the local language that indemnified the employer against any compensation or claim by the employee.

His local permits, including visa, expired six months back and he is reliant on the mercy of local Good Samaritans for food. He further revealed that another Indian youth, Sandeep Sharma, a native of Punjab who was employed on vessel 'Arj', faced similar atrocities and died on May 24 due to negligence of agents/employers including lack of basic facilities and non-availability of medical assistance to him.

Five Indian seafarers, who were arrested in Iran in February last year, were released after 403 days in March, 2021. Five days ago, they expressed their plight in a video message. The Indian citizens—Aniket Sham Yenpure and Mandar Milind Worlikar from Mumbai, Naveen Singh from Uttarakhand, Pranav Kumar from Bihar and Thamizhselvan Rengasamy from Tamil Nadu—are yet to return to India as the Iranian authorities have not returned their passports and other documents till now.

In a video, Aniket was appealing to the prime minister for repatriation."We are recording this video from Chabahar, which is situated in Iran's Sistan-Baluchistan. This is the same Chabahar where India is building a port worth $200 million," Aniket was seen saying in the video. He added that they were languishing in jail for over 400 days on false charges trumped up by their shipowners and agents.

"We are innocent yet have suffered in prison. We finally have been released on March 9, 2021. Despite being proven not guilty, Iranian officials have neither returned our passports nor have they given us our identification documents," Aniket said.

Puneet Singh, president of the Indian World Forum who is following the case with the Indian authorities, told THE WEEK that the modus operandi of these recruitment agents is a matter of serious concern and breach of national security as frivolous documentation is being created and used to mislead immigration authorities repeatedly. He has also alerted the authorities over a Uttar Pradesh resident, who has created fake profiles on social media, in particular on Facebook, to attract seafarers for jobs.

Puneet highlighted that "these seafarers belonging to lower-middle-class families have not only been duped by their respective recruitment and placement services agents in India" who in "collusion with their international partners promised them hefty paying jobs in Gulf”, but also "each of them has been extorted to the tune of Rs 500,000 as charges towards arranging overseas employment".

The forum also urged the Ministry of Home Affairs, Ministry of External Affairs and Ministry of Shipping to take stringent punitive action against the recruitment and service placement agents and all other accused involved in the human trafficking racket.