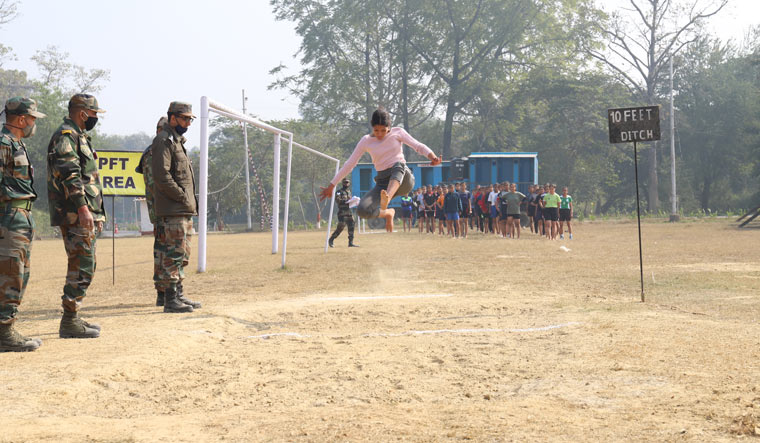 Havildar Krishan Kumar has had a challenging career with the Signal Corps of the Indian Army. After serving his country for 18 years in multiple counter-terrorism operations, and helping his unit with communication, the 38-year-old from Purnia district of Bihar has decided to take voluntary retirement.

Every year, thousands of soldiers opt for voluntary retirement. Till date, the Army headquarters has over 37,000 requests from its jawans, who wanted to leave the force much before their retirement age. And, in addition, last year 21,563 soldiers have superannuated. Usually, about 60,000 fresh recruits join the Army every year, which helps India maintain a manpower surplus. The Indian Army is ranked as the world’s second largest army. India shares over 7,300 kilometres of borders with Pakistan and China alone. Unlike nations like Israel, who invest and depend heavily on technology, India relies more on the strength of its numbers to ward-off mischievous attempts on its borders.

However, off late, there is a growing concern in the Indian Army. The COVID-19 pandemic has halted India’s recruitment drive for the last 18 months. Due to COVID restrictions, many of the recruitment rallies had to be postponed or cancelled. Latest is the cancellation of the common entrance exam scheduled on June 27 for selection of soldiers. And this will have a corresponding delay in their training at regimental centres.

The concern is more amplified among Indian Army’s Formation Commanders, many of whom are staring at almost 20 per cent deficiency in strength of their units. There is fear that this yawning gap will widen if not acted upon immediately. Even Army’s elite anti-terrorism unit, the Rashtriya Rifles, has not been able to tide over this problem.

Last year, when the gap in recruitment was about nine months, the Army had claimed the shortage in numbers would be dealt with, in phases, by 2023. Now, it has been 18 months, since the last recruitment drive and concerns have become more intense.

And with the fewer number of 'nafri', commonly called for the headcount in every military units, commanding officers are left with no option but to do the same task with lesser men. An infantry battalion (approx 850 men) is operating with close to 15 per cent of manpower shortage.

"Deficiency of manpower is across the board in all Army formations. And, it is the biggest challenge any commanding officer these days. Deficiency might have catastrophic affect, if no immediate measures are taken," a Commanding Officer of unit, deployed on the Line of Control told THE WEEK on condition of anonymity.

Similarly, another senior officer maintained that Indian Army is a manpower intensive Army. "As our approach is defensive, so we need to guard very inch of our land. We are not like technology-driven Israeli Army, which can compensate manpower with high-end equipment," he said, while suggesting "risk has to been taken, because delay (in tackling manpower) will be a disaster".

Though guns are silent on the Line of Control with Pakistan following the February ceasefire agreement, the Army cannot be caught off-guard.

Moreover, anti-terrorism operations are on at the valley. And, the border with China has been hugely protected since Ladakh stand-off.

Indian Army has taken multiple preventive measures to combat COVID-19 pandemic, as about 90 per cent of its soldiers are fully vaccinated to fight out the invisible enemy.

The manpower planning directorate of the Indian Army is regularly getting inputs from the formation commanders about manpower crunch of soldiers, who are the actual men on ground.

In view of the deficiency, and to control the outflow, Sena Bhawan has even denied permission to 25,709 of its men to leave the force, despite their application for premature retirement being accepted. It helps in reducing the deficit partially, Army officials believe. They have been put on waiting list, while applications of 37,102 soldiers, who wanted to leave the force, are pending with the Army headquarters.

Unlike civilian government employees, military personnel retire by rank at a comparatively younger age. All jawans retire in their mid-30s and JCOs (junior commissioned officers) in mid-40s, while most officers retire in their early 50s, to ensure the military remains young and fighting fit.

The bulk of soldiers serve for a minimum of 15 years and are released depending on the rank and cadre vacancies in their stream and are compulsorily retired when they reach 37 years of age.

In 2002, Indian Army had carried out massive recruitment of soldiers to fill in the shortcomings noticed in Kargil war and Operation Parakram. And, most of them who were recruited in 2002, are on the threshold of retirement.

On an average, Army conducts 150 recruitment rallies all over the country, and over 30 lakh people land up at the venue (some compare it with Kumbh Mela). And here, the role of state administration is crucial to maintain law and order in the area.

As another short-term measure, the hiring quota of unit headquarters, where wards of servicemen, ex-servicemen and war widows join the Army, with minimum competition (they don't have to go through the recruitment rallies), is also enhanced to meet the deficiency in absence of large recruitment rallies. But, it is certainly not enough to cater to the requirement of a large Army.

When contacted, a key official in the Director General, Recruitment, said, "Due to COVID-19 pandemic, we could not conduct some recruitment rallies due government protocols. Now that most of the states have gone into the unlocking stage, we are coordinating with them to organise the pending rallies," an officer said. The Army headquarters refused to comment to THE WEEK's query.

A latest instruction from the Director General, Medical Service, states that "suspension of recruitment medical examination for recruits for various entry into Army has been further extended to 30 June, 2021."

"Certainly, it's a challenging situation for the military establishment to ensure regular flow of fresh recruits. Something needs to be done at the earliest. Eventually, it will affect the operational readiness," says Major General Nilendra Kumar (Retd), a former Judge Advocate General of Indian Army, while adding the selection can be done at the regiment level instead of following the centralised mechanism.

"If the situation (pandemic) continues, the gap of available manpower is surely going to be bigger. Deficiency will be a major cause of concern, if we are hit by another wave. Then, it will cause a major upheaval," said Lt General Rakesh Sharma (Retd), former Adjutant-General of Indian Army, whose office is responsible for manpower planning, HR policy issues, recruitment and discipline. He added that there will be problem for 2022-2023 because fewer number of trained men will be available. And, as Plan B, the Army may go in for reduced days of training to meet the shortage of men in case of contingency or war.

Keeping soldiers' voluntary retirement application on hold may lead to frustration in the military, as the person who are seeking exit, will not be motivated to serve the Army.

"Person on the exit-mode, to an extent, can be a nuisance and cause indiscipline in the unit, if his application is not accepted for long," an officer said.

Some believe that not allowing soldiers to leave voluntarily is also due to a new retirement formula of Chief of Defence Staff General Bipin Rawat. Besides a proposal to increase the age of retirement of Colonels from the existing 54 to 57, for Brigadiers from 56 to 58 and for Major Generals from 58 to 59, the age of retirement of JCOs and other ranks in Logistics, Technical and Medical branches is also proposed to be increased to 57 years.

But, experts feel it's not an easy option to be implemented. "Army had tried it (extension of service) in 1999 for officers, but it delayed the promotions for next two years. Many people suffered due to the service extension policy," an officer said.

Charanjeet Singh, 38, who served for 17 years in the Brigade of Guards and quit the Army in November, claimed that several of his colleagues wanted to leave to the force, and take up a second career in life.

"I did not see any future in continuing with the Army, as the chances of promotion are very limited. Moreover, I was feeling a bit stifled. So, I decided to leave the Army, to look for a better career option, also keeping my family commitments in mind," Singh, a resident of Rohtak, Haryana, told THE WEEK over phone.