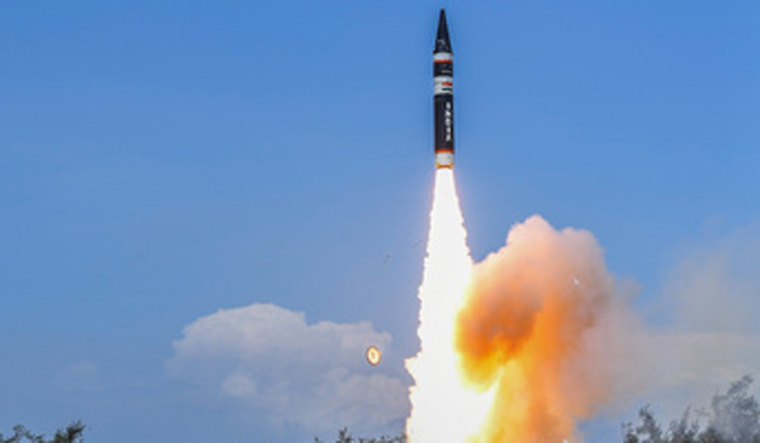 Agni P is the first of the new class of Agni series of missiles, developed by DRDO | PTI

Developed by the Defence Research and Development Organisation (DRDO), the flight test was done from Dr. APJ Abdul Kalam island near Balasore, off the Odisha coast at 10.55 am on June 28.

Scientists involved in the development said Agni Prime has a range of 1,000-2,000 km and can be launched from rail and road as the missile is canisterised. With its range, the missile does not have the capability to target the Chinese mainland. "But, it covers the entire Pakistan territory," an official maintained.

Agni P is the first of the new class of Agni series of missiles, developed by DRDO. The missile weighs 50 per cent less than Agni 3 and has new guidance and a new generation of propulsion.

A new generation advanced variant of Agni class of missiles, Agni P will replace Prithvi, and tactical surface-to-surface short-range ballistic missiles, Agni-1 and Agni-2, as these missiles were built two decades ago and their technologies have become obsolete in the current scenario.

"Various telemetry and radar stations positioned along the eastern coast tracked and monitored the missile," DRDO said in a statement while adding that "The missile followed text book trajectory, meeting all mission objectives with high level of accuracy."

Agni Prime is a very short and light missile when compared to other missiles in this class. A lot of new technologies have been incorporated in the new missile, according to DRDO officials. It is a ballistic missile with a rocket-propelled self-guided strategic-weapons system that follows a ballistic trajectory to deliver a payload from its launch site to a predetermined target. The missile is capable carrying conventional high explosives as well as chemical, biological or nuclear munitions. With its high accuracy rate and the ability to contain the collateral damage, the ballistic missile can be used for lower-yield nuke bomb.

The Agni series of ballistic missiles is being developed under the Integrated Guided Missile Development Programme of the DRDO.

India's first intermediate-range ballistic missile Agni 1 was successfully test-fired and 1989 and inducted into service in 2004. It has a range capability between 700 and 900 kilometres. Since then, four variants of Agni missile have joined the India's arsenal. Agni-V, with its 5,000-plus km range, was developed keeping China in mind.

Agni V made India the eighth nation in the world to have intercontinental ballistic missile (ICBM) capabilities. It can target any target in Asia and half of Europe with its range of 5,000 km and can carry a payload of 1.5 tonnes of nukes.

However, India is lagging behind both its neighbours China and Pakistan in the numbers of nuclear warheads.

According a recently released report by the Stockholm International Peace Institute (SIPRI), while India has only 156 nuclear warheads, China is way ahead with 350 nukes. Pakistan has 165 warheads. Russia tops the list with 6,255 warheads and the United States has 5,550 nukes.