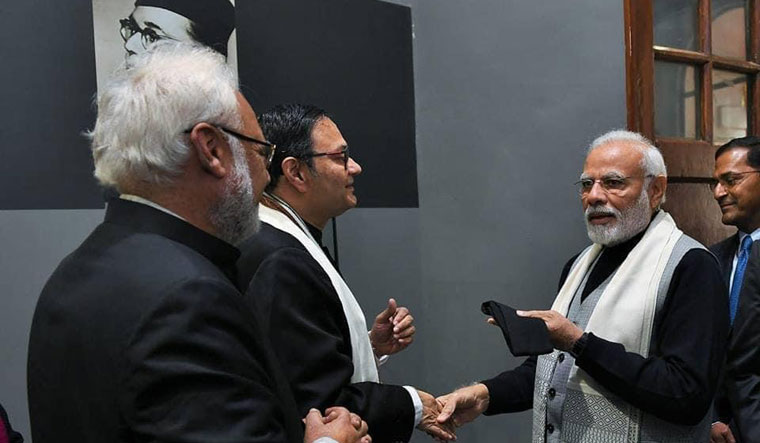 The Bose family in Kolkata has raised an objection to the shifting of the historic cap of Netaji Subhash Chandra Bose from Red Fort museum in Delhi to Kolkata’s Victoria Memorial.

The cap, which Netaji used to wear while being in Germany, was handed over to Prime Minister Narendra Modi by the Bose family in 2019. Modi himself placed the cap inside a glass-made box at the Red Fort museum.

“The prime minister was handed over the cap by me and he himself placed the cap at Red Fort museum in Delhi,” said Chandra Kumar Bose, grand-nephew of Subash Chandra Bose and spokesman of the larger Bose family.

However, against the wish of the Bose family, the cap has been reportedly shifted to a museum at Victoria Memorial. The special museum was built to mark the 125th birth anniversary of Netaji.

Chandra Bose said the Bose family does not consider Victoria Memorial as the right place for keeping anything connected to Netaji.

“Victoria Memorial is the symbol of British Raj against whom Netaji gave away everything. Red Fort is the place which is essentially connected with Bose’s slogan of Delhi Chalo,” he said.

Red Fort was also the place where the INA trial took place after the second world war.

According to Chandra Bose, he handed over the historic cap to the prime minister against the wish of a section of his family.

“Many in our family did not want me to hand it over to PM. But I did that as I thought the  government must keep that at the Red Fort. I am upset that the cultural ministry shifted it without even informing us. I have drawn the attention of the prime minister and the cultural minister,” he said.

The cap was originally accessed by Chandra Bose’s father Amiyanath from Germany. Amiyanath, nephew of Subhash Chandra Bose, gave it to Chandra Bose before his death almost 30 years ago.

Chandra Bose said he even wore it a couple of time. The cap had some marks inside through which one can make a distinction.

The historic cap, which Bose wore while meeting many world leaders, was one of the very few things the Bose family retained.

The Victoria Memorial authorities could not be contacted. However, in the evening the Cultural Ministry swung into action and promised the Bose family to look into the issue.

A member of the Bose family said that they would never have handed the cap over to the Union government had they had any idea that it would be taken out of the Red Fort in Delhi.

“This is sheer disrespect to the great son of India,” said a member of the family.