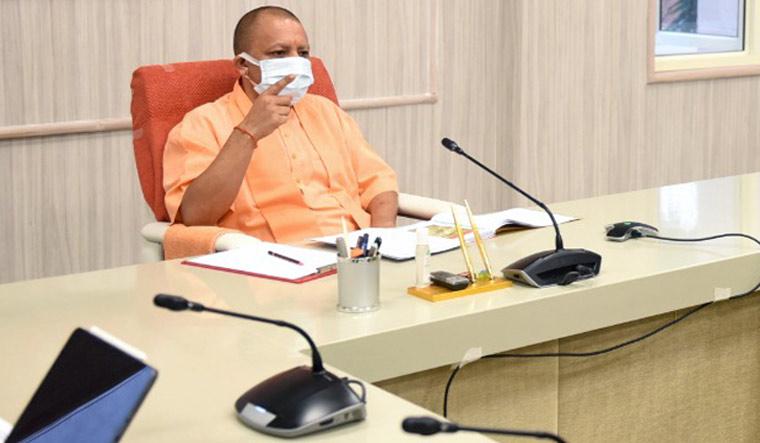 Criticising the handling of the COVID-19 crisis in Uttar Pradesh, a ruling party leader has claimed that at least 10 people died in every village during the second wave as no lessons were learnt from the first one.

State BJP working committee member Ram Iqbal Singh, who made the remarks on Saturday, is the latest among the party's leaders who have questioned the management of the coronavirus infection in the state.

Speaking to reporters in Ballia, Singh rued that the Health Department did not learn any lesson from the first wave of COVID-19 which led to a large number of deaths due to the disease in the second wave.

At least 10 people died from every village in the state during the second wave of COVID-19 pandemic, he alleged.

The BJP leader also demanded that Rs 10 lakh be given to the kin of those who succumbed to the infection.

He lamented that after 75 years of freedom, this district with a population of 34 lakh, has no doctors or medicines.

On being reminded that during his visit to Ballia, Chief Minister Yogi Adityanath had expressed satisfaction with the arrangements made by the Health Department, Singh said the officials had misled the CM, and the truth was not shown.

He also urged the BJP government to give a diesel subsidy to farmers.

Earlier in May, BJP's Sitapur MLA Rakesh Rathore had joined the list of ruling party lawmakers in Uttar Pradesh, expressing resentment over the alleged COVID-19 mismanagement in the state and saying that he feared a sedition charge for speaking up.

"What standing do MLAs have? If we speak too much, treason and sedition charges will be slapped on us as well, Rakesh Rathore had told reporters, according to a video clip.

On May 9, Union Labour minister Santosh Gangwar had complained to the chief minister about the situation in his Bareilly constituency, saying officials don't take calls and government health centres send back patients for 'referrals' from the district hospital.

In a letter to Adityanath, he had also complained about the big shortage of empty oxygen cylinders and the high prices of medical equipment in Bareilly.

A day later, BJP MLA from Jasrana in Firozabad Ramgopal Lodhi claimed that his coronavirus positive wife was not admitted to an Agra hospital for over three hours, with officials saying that beds were not available.

In April, a 'confidential' letter written by UP Law Minister Brajesh Pathak surfaced on social media. Pathak had lashed out at his state's health authorities, complaining that beds for coronavirus patients were falling short and ambulances took hours to arrive in the state capital.