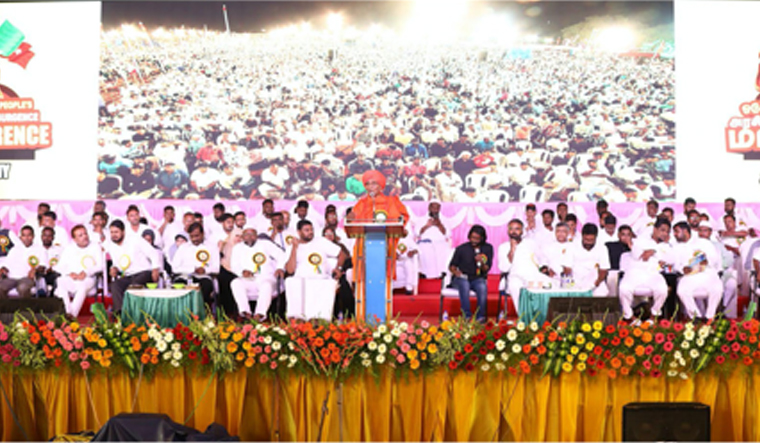 Seven decades after independence. A period to be marked by its own as a country. The question as to whether the country has fulfilled its responsibility as a proclaimed secular republic, certainly has relevance. To which direction did the country travel in the past decades?  Has it been in fact in the ‘democratic-secular direction’ as envisaged by the Constitution that the country travelled?

Definitely ‘no’ is the answer. On the other hand, the present-day realities are pointers that the country is travelling towards monolithic regime using democracy as a cover.  It was during the 1975-77 internal emergency that the country has first understood that autocracy has a place within democracy. Emergency showed us as to how effortlessly democracy could be transplanted to autocracy. The lethargic approach of the people of the country towards the emergency has been the turning point for the tyrannical fascist forces who have been searching for an opportunity to sabotage democracy. It has been in continuation with this, the Hindutva Right Wing fascism got strengthened to the level of undermining the country’s democratic-secular setup, grown to be capable of controlling and deciding the collective conscience and capturing power.

Destruction of Babri Masjid was the exposure of the fall of not only the constitutional system of the country, but also of the mainstream political parties in the country. It was revealed that these mainstream parties didn’t have any policy against the fascist perpetrations. Hindutva fascism devastatingly on one side; naturally, the proclaimed secular political parties of the country had the obligation of resisting it. Unfortunately, not only these political parties were not ready to confront fascism, even for the goal of ‘power’, but they were in the role of the handlers facilitating the entry of the Hindutva agenda.

These proclaimed ‘secular’ segments were unable to be just to the Constitution of the country on the topic of representation in power. Even after decades of independence, the full rein of the centres that control and distribute the resources of the country is still in the hands of the forward castes who don’t constitute even 10% of the population. 90% of the country’s population is out of the power centres. ‘Reservation’ that was brought to overcome this situation stands toppled completely. In brief, no existing political parties in the country is either interested or capable of addressing and resisting the Hindutva hegemony that has grown and taken over the power of the country under the cover of democracy. Besides, it is evident that these political parties are handling the Right wing Hindutva agenda overtly and covertly.

It is in this backdrop, Social Democratic Party of India or SDPI is formed a decade ago, in 2009 to be exact, with the slogan “Freedom from Hunger; Freedom from Fear.” Certainly, the great challenge that the country faces is the hunger and fear of the people in the country. Basic reason for these two factors is the ‘savarna-Hindutva’ ideology that has gripped the country. It is with this precise political realisation that SDPI enters with the objective of building a new India devoid of hunger and fear.

It has been in a situation in which no small or large political parties were ready to raise a finger against the Hindutva communalism and its proponents ; that SDPI gave leadership to numerous agitations and struggles against ultra right ideology and its communal agendas, across the country. It is to be underlined that the one and only political party in the country that has organised strong and systematic agitations all over the country against the Citizenship Amendment Act and NRC.

Besides, SDPI has been able to lead thousands of active workers to involve in relief and rescue works ignoring their own life, day and night, when natural calamities like flood and pandemics like Covid and Nipa wreak havoc across the country. These interventions cause to attract accolades not only from the public, but from the authorities as well. SDPI  is one of the leading parties carrying out active relief work across the country during this Covid pandemic period.

In brief, SDPI works among the people day and night for the construction of a hunger-free and fear-free new India. The confidence this has created among the minority-backward communities is not small. People have started discerning that there is scope for precise defence and democratic agitations against the right wing fascism that the common people were forced to believe were inaccessible and had no opponents. As part of this, people have en-bloc started to be ready to become part of movement, circumventing adverse political circumstances and overcoming sabotage attempts of the state, across the country within a short span of time.

SDPI is focussing on empowering the victimised people by entering into the epicentres of right wing fascism. As part of this endeavour, SDPI organises political work in all states including UP and Gujarat, all over the country; empowers the people politically by enlightening them; and provides them confidence.

No doubt, SDPI shall mark its own distinctiveness in tomorrow’s politics. SDPI will have a crucial role to play in the future politics