He denies charges of unlawful action, indiscipline and denial to take orders 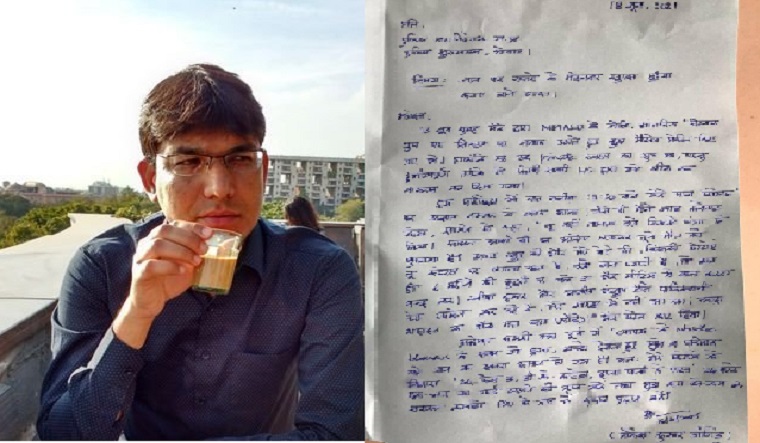 IAS officer Lokesh Kumar Jangid; (right) a copy of his letter to DGP

The row over transfer of IAS officer Lokesh Kumar Jangid and consequent leak of his alleged chat accusing a senior officer of corruption has taken a fresh turn, as the officer continued to be on the offensive calling the show cause notice served to him by the general administration department (GAD) of the Madhya Pradesh government ‘mala fide’.

In an official reply to the notice on Monday, he said, “The show cause notice seems mala fide, on behalf of officers who may have something personal against me, as none of my conduct merits this show cause notice.”
He added that the inexplicable delay in sending of the show cause notice (on June 16 regarding an incident of May 31) "gives rise to concern regarding mala fide involved in the matter."

Jangid had been sent the show caused on June 16 on the charges of "tapping and making public" a phone call with principal secretary of the GAD, Deepti Gaud Mukherjee, regarding his transfer from the post of Barwani additional district magistrate (ADM) to additional mission director of the Rajya Shiksha Kendra on May 31.

The show cause notice had said Jangid’s action amounted to breach of privacy of the principal secretary and also breach of confidentiality of a senior officer who is his departmental head.

Jangid’s transfer was his ninth in his 4.5 years of tenure in Madhya Pradesh, and later in a series of messages on a social media chat group (of MP cadre IAS officers) that got leaked, the officer had charged his senior in Barwani of corruption and also of using influence with chief minister to get him transferred. It was after this leak of chat and the consequent controversy that Jangid was served the show cause notice.

Jangid sent his reply addressed to the under secretary (personnel) of the GAD to the official e-mail ID of the principal secretary of GAD on Monday, sources said. Jangid was unavailable for comments.

In his detailed reply (a copy of which has been accessed by THE WEEK, the officer, while expressing surprise over the notice served to him after "seven years of dedicated service without a blot," has denied the charges.

Jangid has issued point by point rebuttal of the notice, which framed charges on him under the rule 3(1) and 2(B) (x, xi) of the All India Services (Conduct) Rules, 1968, served to him on June 16.

The rules 3(1) pertains to maintaining integrity and devotion to duty and not doing anything unbecoming of a member of the (all India) service.

The rule 2(B) (x, xi) expects the officers to refrain from doing anything which is or may be contrary to any law, rules, regulations, and established practices and to maintain discipline in the discharge of duties and be liable to implement the lawful order duly communicated.

The basic premise taken by the officer to defend himself is that he did not separately tap the phone call with his senior officer nor made it public as he shared it only with four fellow officers 'in good faith' through private social media messages, after the written order of his transfer had been made public.

Jangid has also mentioned in his reply that there was nothing in the said conversation with the senior officer (which was an oral communication to him regarding his transfer from Barwani) that seemed to require protection or secrecy and there was nothing personal or confidential about the conversation. He mentioned that in the said conversation he did not even ask the reason for his transfer from the senior officer.

He said the phone call was official in nature and not ‘tapped’ but recorded ‘as usual practice’ to ensure better implementation of directions of the senior officer.

The officer has quoted additional sections of the service conduct rules, Right to Information (RTI) Act and Supreme Court and different High Court rulings to make his points.

The officer concluded his reply saying his action was neither inappropriate nor illegal. He said he was available for further questions and believed that he would be accorded fair and just treatment in accordance with rule of law. He also added that he would continue to put his best foot forward in the service of the nation and uphold constitutional values in accordance with the official oath taken.