After one year, Natasha Narwal, Devangana Kalita and Asif Iqbal are out of jail 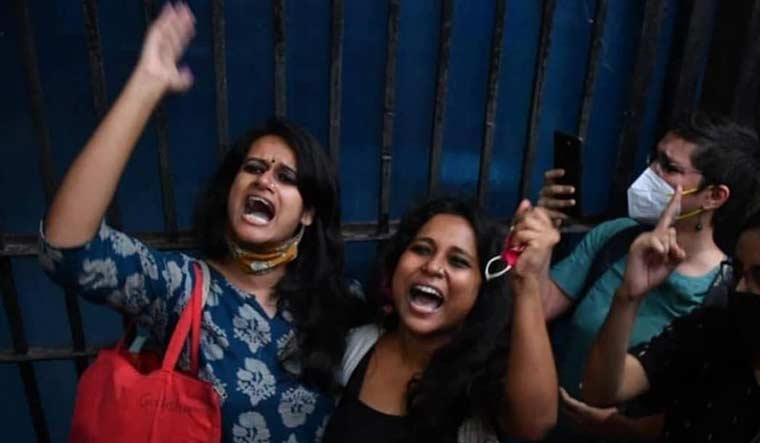 Natasha Narwal and Devangana Kalita after their release | Pinjra Tod

Student activists Natasha Narwal, Devangana Kalita and Asif Iqbal have been released from Tihar jail today after the Delhi High Court upheld their bail application. The trio had spent over a year in prison following their arrest under the Unlawful Activities (Prevention) Act (UAPA) following the anti-Citizenship Amendment Bill protests in early 2020.

Videos of the students smiling in the midst of a crowd while chanting slogans after their release have been circulating on social media. The Delhi High Court had on June 15 granted bail to the three student activists. They walked free hours after the Delhi HC ordered their immediate release, two days after they received bail.

However, two days passed before the students were actually released from prison, prompting the High Court to observe that the trial court is expected to “proceed with promptitude and expedition” after the trial court acted in deferring orders for their release. “The least that is expected is that trial court takes a decision with alacrity. The trial court cannot be lax about it once we pass a bail order", Justice Sidharth Mridul said.

Narwal and Kalita are students of the Jawaharlal Nehru University (JNU) while Tanha was a student from Jamia Millia Islamia.

"It shows the desperation of the government... We are women who are not scared of them," Kalita told reporters after coming out of the jail gates, NDTV reported. "We survived because we received tremendous support from friends, from well-wishers. I thank them all," she said.

Narwal said she doesn't want to comment on the case as it is still in court. "However, we would like to thank the Delhi High Court for upholding what we believe in. Any such protest that we have done is not terrorism. It was a democratic protest, led by women," said said.

"They won't be able to threaten us with jail. If they threaten to incarcerate us, that will only strengthen our resolve to carry on our fight," Narwal said.

Natasha's father, Mahavir Narwal, died of Covid in May while she was in jail. Her brother, who came to receive her, said they miss their father, who if alive would have come to greet her on walking out of jail.

On Wednesday, the Delhi Police had approached the Supreme Court asking it to stay the bail order.

The women activists, who were members of the Pinjra Tod collective of women students and alumni from colleges across Delhi, as well as Iqbal, who is a member of the Students Islamic Organisation of India, were arrested in connection with the Delhi riots that broke out during the protests, with the police accusing them of being part of a larger conspiracy behind the riots.

Terming as “somewhat vague” the definition of “terrorist act” under the stringent UAPA laws and warning against its use in a “cavalier manner”, the high court set aside the trial court orders denying bail to the student activists.

“We are of the view that the foundations of our nation stand on surer footing than to be likely to be shaken by a protest, however vicious, organised by a tribe of college students or other persons, operating as a coordination committee from the confines of a University situate in the heart of Delhi,” the high court had said.

In three separate judgments of 113, 83 and 72 pages, the high court had said that although the definition of ‘terrorist act’ in section 15 of the stringent Unlawful Activities (Prevention) Act (UAPA) is wide and somewhat vague, it must partake the essential character of terrorism and the phrase ‘terrorist act’ cannot be permitted to be applied in a “cavalier manner” to criminal acts that squarely fall under the IPC.

“We are constrained to express, that it seems, that in its anxiety to suppress dissent, in the mind of the State, the line between the constitutionally guaranteed right to protest and terrorist activity seems to be getting somewhat blurred. If this mindset gains traction, it would be a sad day for democracy” which would be in peril, the high court had said, adding there was nothing to show the possible commission of a terrorist act.