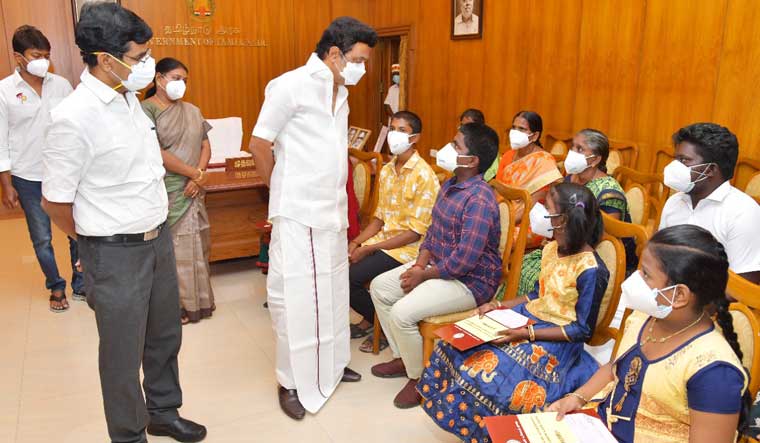 Tamil Nadu Chief Minister M.K. Stalin, on Wednesday, launched a scheme to offer financial assistance and other benefits to children who lost either one or both of their parents to COVID-19. The state government has worked out long-term plans to support the children affected due to the pandemic.

Under the new scheme, a deposit of Rs 5 lakh will be made in the bank accounts of children who lost both parents to COVID-19. This would be paid with the accrued interest when the child turns 18.

Stalin handed over certificates acknowledging the receipt of deposits made in the name of these children in the Tamil Nadu Power Finance and Infrastructure Development Corporation Limited to their guardians. While handing over the certificates, Stalin personally spoke to the children and consoled them.

He also handed over cheques for Rs 3 lakh each to the parents of five children, who have lost their spouse to the pandemic. Under the scheme, a deposit of Rs 3 lakh will be in the accounts of children who lost either of their parents to COVID-19. The deposit would be paid to the child along with the accrued interest when he/she completes 18 years of age.

On Tuesday, Stalin had helped a 23-year-old girl, Sowmiya, get a job to support her family. Sowmiya, an engineering graduate from Salem district, submitted a petition to Stalin during his recent visit to the district. Along with her petition, Sowmiya had enclosed a two sovereign gold chains as donation towards chief minister's COVID relief fund. In the petition Sowmiya had sought a job to support her family. She had lost her mother to COVID-19 and her father had taken up a job as security guard. All the family’s savings were exhausted on the treatment, she said in the petition. On reading the petition, Stalin had tweeted calling her has "ponmagal" (golden girl) and assured her a job. On Wednesday, Electricity Minister V. Senthil Balaji reached out to Sowmiya, on the instructions of Stalin, and gave out the appointment order for a job at one of the private companies on the outskirts of Salem. The chief minister called Sowmiya over phone and asked her to work sincerely.