Would any bureaucrat dare to keep Mamata waiting for 5 minutes, asks BJP 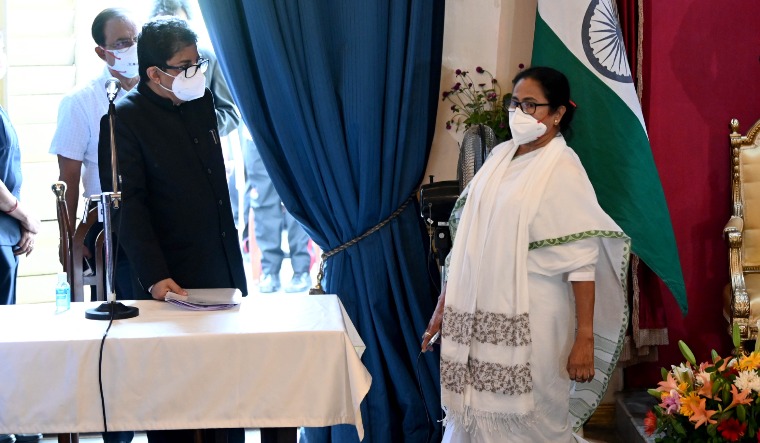 With another Central team visiting West Bengal, this time to assess the damage caused by the recent cyclone Yaas, the tussle between the Centre and state now has become a regular routine. This is the second time the Centre has decided to send a team even as the third Mamata Banerjee government has completed just one month in office.

Last week, the state’s politics saw a churn after former chief secretary Alapan Bandyopadhyay was recalled to Delhi by the Centre. Bandyopadhyay did not go and instead decided to retire from service. He had been earlier given a three-month extension by the Central government.

While the Centre has slapped a show-cause notice against Bandyopadhyay on why cases under the national pandemic act should not be slapped against him, the former IAS officer, sources said, has given a point-by-point rebuttal to the charges levelled against him.

“He said how, despite being in charge of the supervisory work during pandemic and cyclonic disaster of the state, he travelled around 250km from Kolkata to reach the prime minister’s meeting venue at Kalaikunda airbase,” said a state government source.

The 1987-batch officer also said how, during the two-month-long election, he acted impartially and Election Commission even recognised his effort. Bandyopadhyay also reportedly mentioned how in different capacities he worked in the state without fear and favour in last three-and-half decades.

An IAS officer association member said, “The duties of IAS officers of the states are earmarked by the state government. If the Centre needed the service of chief secretary during the prime minister’s meeting, a message regarding that should have been sent to the chief minister’s office by PMO, specifying the urgent presence of the chief secretary prior to the arrival of prime minister. Now the way Bandyopadhyay has been victimised would not go down well with the officers in the state bureaucracy. The officers are always at beck and call. They have no mind of themselves.”

In an interview with THE WEEK, retired Supreme Court justice A.K. Ganguly supported Bandyopadhyay when he said that the charges against the officer did not show any dereliction of any duty.

“What would he do if he is accompanied by chief minister?” asked justice Ganguly.

Meanwhile, even while the Centre is yet to take final call whether to slap pandemic act on Bandyopadhyay, there has been no let-up in the mudslinging between Central and state governments.

West Bengal Governor Jagdeep Dhankhar lambasted the state government after a murder took place in Barackpore where Jayprakash Yadav, a BJP activist, was targeted by bombs thrown by three youths ridding a motorcycle. Yadav died and three others got injured in the attack, which took place on June 7. According to BJP, around 37 BJP workers have been killed since the election result declaration on May 2. A BJP delegation has reached Delhi and it would hold talks with Home Minister Amit Shah and BJP president J.P. Nadda. The BJP delegation, comprising 18 MPs from the state, is supposed to meet President Ram Nath Kovind.

Dhankhar called new chief secretary H.K. Dwivedi to report to him about alleged retributive violence, which was showing no sign of subsiding. However, the way the governor is taking to social media to deplore the violence indicates that Centre-state relations are likely to remain frayed.

At times, even TMC party MPs/MLAs are also responding. Sadly, the situation in West Bengal has become a talking point for the rest of India.

To allay any fear that the Centre is depriving the state of its due, Prime Minister Narendra Modi travelled to West Bengal shortly after Yaas hit the coastal belt of West Bengal. Modi had visited last year after cyclone Amphan. Modi allotted Rs 400 crore for West Bengal to repair the damage, while Chief Minister Mamata Banerjee submitted the estimated damage was Rs 20,000 crore. Modi also released all dues under farmer’s scheme and sent around Rs 7,000 crore under Jal Jeevan Mission. However, it was still unknown why a Central team was sent to assess the damage situation in the state, a week after cyclone Yaas.

“It was to assess whether looting of resources is happening this time like it happened during Amphan. Amphan money pilferage is being probed by the Comptroller and Auditor General of India,” said a senior BJP leader in the state.

This is the second Central team Modi government has sent to West Bengal in last one month. The first team was sent to assess the post-poll violence in the state.

Trinamool Congress has rubbished the allegations and alleged the Centre had no intention to do anything for West Bengal.

MP Saugata Roy said “BJP is damaging the Centre-state relation in a big way. That is primarily because they could not digest the defeat they received in the election.”

Roy said that Centre’s interference was damaging as it tried to enforce its rule alleging post-poll violence or using Central agencies against senior ruling party leaders in West Bengal.

“How could they send the Central team alleging post-poll violence? How could they ask the chief secretary of the state to go to Delhi without consulting state government?” asked Roy.

He said the Centre did not intervene where intervention was, arguably, necessitated.

When asked about the tussle between Centre and state, the BJP strongly refuted the allegations.

“I am surprised that you are even asking these questions. Is not it clear who is at fault? There are 28 states and 8 Union territories; out of this, 12 states have governments run by non-BJP or non-NDA parties. How many states or chief ministers have you seen get into an altercation with the Union government, as often as Mamata ji does. She is on constant war path with Union government,” said BJP national spokesman and MP Raju Bista.

Making the party’s position clear for the first time, since Alapan Bandyopadhyay, former chief secretary, was called to Delhi as punishment for not “complying with the order of the higher recruiting authorities” the BJP’s national spokesman told THE WEEK, “Prime Minister has visited other states too. Nowhere else did the chief minister of the state or the chief secretary have this problem. Why is there always a problem with Mamata ji? She speaks of federalism but does not care of cooperative federalism because the word cooperative cannot be found in her dictionary.”

When asked about whether the former chief secretary was victimised unnecessarily, Bista said that prime minister of the country was kept waiting in West Bengal and no where else and it was purposely done by none other than the chief minister herself.

“Who enabled a bureaucrat to keep the prime minister of the country waiting? Both chief minister and chief secretary disrespected the prime minister and kept him waiting. Then Mr Bandyopadhyay refused to go to report to the Centre after getting a recall notice. Instead he chose to resign from his post. How Mamata ji would have reacted had any bureaucrat kept her waiting for 30 long minutes? Would any bureaucrat in West Bengal dare to keep her waiting for 5 minutes, let alone 30 minutes?” asked Bista.

He said the recall order of Bandyopadhyay was given by the Centre, according to rule 6(1) of IAS cadre Rules of 1954.

“This rule makes it abundantly clear that the Union Government can recall and depute an IAS officer to the Central cadres as and when the need arises. His resignation shows that he was acting more as a politician, than as a bureaucrat. The Central government would not recall him if there was no need,” Bista said.

The BJP spokesperson said that the West Bengal chief minister was not a responsible politician.

“She sat on a dharna to protest the CBI summons to then Kolkata police commissioner, who destroyed evidence in Saradha case. Recently, too she sat on a dharna against CBI. She picks a fight with governor on a daily basis apart from blocking the Central government schemes,” Bista alleged.