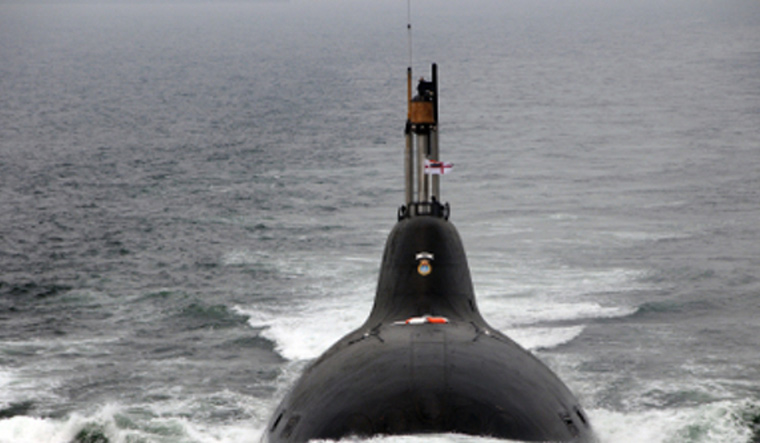 On June 4, Twitter was abuzz after photographs from Singapore showed the Indian Navy's nuclear-powered submarine INS Chakra transiting through the Malacca Straits.

Later in the day, reports emerged that the warship was on its way back to Russia. India agreed to lease the INS Chakra from Russia nearly two decades ago and inducted it into the Indian Navy in 2012 on a ten-year lease. The Non Proliferation Treaty (NPT) bans the sale of nuclear-powered vessels, but is silent on leasing of such ships. This was the second Indian Navy submarine to have the name Chakra.

The INS Chakra was also used to train personnel who would work on the indigenously built nuclear submarines of the Indian Navy.

On Wednesday, Russian state news agency TASS reported the early return of the INS Chakra was necessitated due to an explosion on board the vessel in the spring of 2020, which damaged both its hulls. The Chakra, like many other Russian-designed submarines of its era, is a 'double-hulled' submarine, with a pressure inner hull and a lighter outer hull to allow for more buoyancy and capacity to absorb damage in the event of being hit by a torpedo or mine.

The Russian language website of TASS quoted a source in the Russian "military-industrial complex" as saying, "The explosion of a high-pressure air cylinder on the Chakra submarine... occurred in the spring of 2020." The report claimed the high-pressure air cylinder was located between the two hulls. In addition to damage to the hulls, the explosion also damaged "electronic weapons and hydro-acoustic equipment".

The TASS report claimed "after the emergency, Indian technical specialists completed the repair of both hulls of the submarine," following which it was sent to Russia.

(UPDATE: TASS removed the news item on the explosion hours after it was uploaded and claimed it had been issued erroneously.)

NDTV had reported last week the "early return of the submarine became necessary because of her 'increasingly unreliable powerplant and maintenance issues' besides the overall condition of the vessel, which was extensively used by the Indian Navy to train crews on advanced nuclear submarines".

In October 2017, reports emerged that the front portion of the INS Chakra had been damaged when the vessel was entering Visakhapatnam harbour. The accident had damaged the ship's sonar dome, severely limiting its capability to detect enemy threats on the surface and underwater. The Hindu had reported Russia sought $20 million to repair the vessel, which had to be dry-docked.

The most serious accident that involved what would be the future INS Chakra happened in 2008. The Nerpa was undergoing sea trials when 20 Russian crewmembers died and another 21 were injured when the fire-extinguishing system on board was activated accidentally, leading to release of toxic freon gas. The accident delayed plans to hand over the vessel to the Indian Navy in 2008.

NDTV reported the 10-year lease of the INS Chakra had cost $2 billion.

Russia is, reportedly, modernising another Akula class submarine for lease to India in a deal valued around $3 billion. Construction of multiple Akula class submarines was affected after the end of the Cold War due to paucity of funds in Russia. This led to long construction schedules for these ships, with some barely seeing service in the Russian Navy. The Russian Navy is currently inducting a new class of nuclear attack submarines called the Yasen, which uses a single-hull design.